No. 9 USC blocks out bigger goals, focuses on visit from Cal 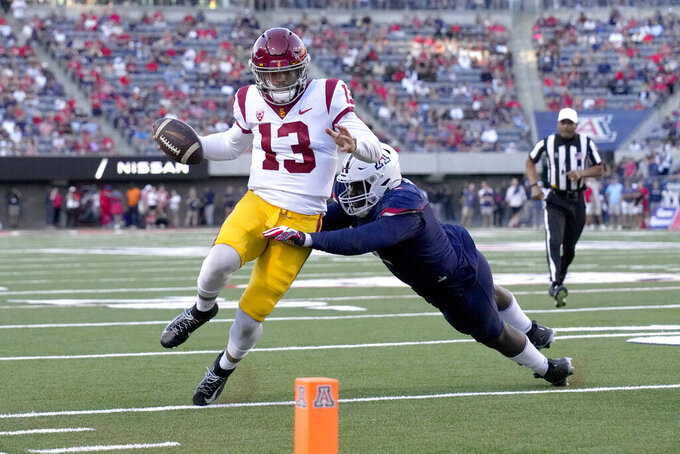 LOS ANGELES (AP) — For a coach who took three Oklahoma teams to the College Football Playoff, Lincoln Riley sure doesn't profess much interest in the rankings that are telling the college football world he's got a shot to get No. 9 Southern California in there as well.

“I don't even look at them,” Riley said. “Ask all my friends back in Oklahoma. I don't care about them. Most of the time, I don't even know what it is, because it doesn't matter right now. It does not matter one bit. You can be ranked whatever. You go lose, it don't matter. You keep winning, it takes care of itself. ... It matters none. I spend not 1% of my energy, brain power, attention — I could not care less. I care about it at one time, and that's the last one. That's all that matters."

Those rankings have USC in the same spot as in the AP Top 25, not that Riley would know or care. He's much more concerned about the Trojans' visit from struggling California (3-5, 1-4 Pac-12) on Saturday night for another conference showdown on the road to wherever USC (7-1, 5-1) is going in his debut season.

The Trojans are big favorites against the Golden Bears, but Riley said it's not difficult to keep his players' attention on the opponents in front of them, particularly after they returned from their bye with a taxing road victory at Arizona last weekend.

The Golden Bears have lost four straight and five of six, but coach Justin Wilcox's program has won two of its last three meetings with USC, including the victory at the Coliseum in 2018 that snapped Cal's 14-game losing streak against the Trojans. Cal rallied from a 14-point halftime deficit for that 15-14 win, but these Trojans don't look a whole lot like Clay Helton's frequently beatable USC squads.

“We know it's a really good team,” Wilcox said. "I know it's very important for our players and our program. It's a great opportunity, and we know it'll take a good football game, but our guys are excited to play, and a lot of them are going home to compete and looking forward to it."

CRUISIN' FOR A BRUISIN'

Cal quarterback Jack Plummer has been sacked a whopping 25 times in eight games, and now the Bears must face the defense that leads the Pac-12 and ranks eighth in the FBS with 26 sacks. Plummer looked physically compromised at times while taking a beating from Oregon last week, but the veteran insists he's fine.

“I've had a couple more nicks and bruises than I have had previously playing this sport,” Plummer said. “I've been getting beat up a little bit, but I've been feeling pretty good by the time gameday comes around. That's just part of football when you're getting a little older. You're just going to have to deal with it."

Caleb Williams is coming off a spectacular 411-yard, five-touchdown performance against the Wildcats even without his top two receivers, Jordan Addison and Mario Williams. Both wideouts could be back from injury Saturday, which might be bad news for the Golden Bears' Pac-12-worst pass defense.

With USC headed to the Big Ten in 2024, this is the final scheduled Coliseum showdown between in-state rivals that first started playing each other in 1915 and first met at the Coliseum in 1923, the year it opened. Cal and USC are meeting for the 108th time.

Wilcox particularly isn't interested in the end of an era, although he said he'd be open to scheduling a nonconference series with USC: “I realize that there's a lot changing in college football right now ... but all we're concerned with is helping our players to perform better."

USC has committed an FBS-low one turnover in its first eight games, an impressive number that Riley is fairly certain he's never seen at this point in a season in his coaching career. Cal's defense has forced 15 turnovers already this season, but Williams has just one interception, while his skill-position teammates have yet to cough it up once.

Exposition Park is in for an incredibly busy Saturday with the MLS Cup final happening right next door to the Coliseum. The match between Los Angeles FC and the Philadelphia Union begins at Banc of California Stadium in the early afternoon, 6 1/2 hours before USC and the Bears kick off at the Coliseum — which is 95 years older than its sidekick soccer arena a few hundred feet away.