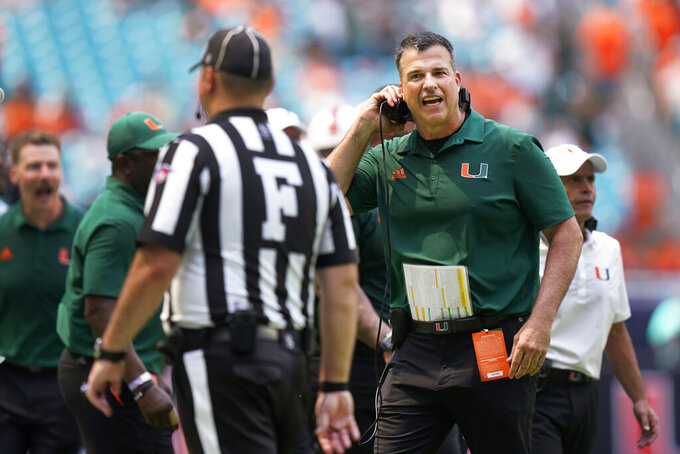 Line: Miami by 3 1/2, according to FanDuel Sportsbook.

It’s all about the Coastal Division, even this early. North Carolina would move 1 1/2 games ahead of Miami in the division race with a win, plus hold the head-to-head tiebreaker. Translation: It’s only the conference opener for the Hurricanes, but they’d already be in big ACC trouble if they lose this one. A win could get North Carolina closer to cracking the AP Top 25, a place where seven ACC teams — Miami included — have already been or currently are this season.

Miami offense vs. North Carolina defense. It’s simple. The Hurricanes’ offense has sputtered, in large part because of injuries on the offensive line, running back and, above all else, receiver. North Carolina is giving up more yards per game than anyone in the ACC, and opposing quarterbacks are completing 67.2% of their passes against the Tar Heels.

North Carolina: QB Drake Maye is easily the frontrunner right now for ACC rookie of the year honors, with 19 touchdowns and just one interception so far this season.

Miami has dropped two straight and is coming off a bye. ... The Hurricanes were picked first in the Coastal, with North Carolina third. ... North Carolina center Corey Gaynor played 38 games at Miami before transferring to the Tar Heels. ... North Carolina is seeking a fourth consecutive win over Miami. In the all-time series, neither team has ever won more than three in a row. ... Miami gave up passes of 69, 71, 89 and 98 yards in the loss to Middle Tennessee. ... North Carolina's Mack Brown is the 68th different coach that Miami’s Mario Cristobal will be facing off against; that seems like a lot, considering this is only the 127th game of Cristobal’s career. ... Miami QB Tyler Van Dyke — dealing with injury-plagued receiving corps — entered the week tied for 104th nationally with four touchdown passes in four games; he was tied for 27th nationally last season with 25 touchdown passes in just nine games.