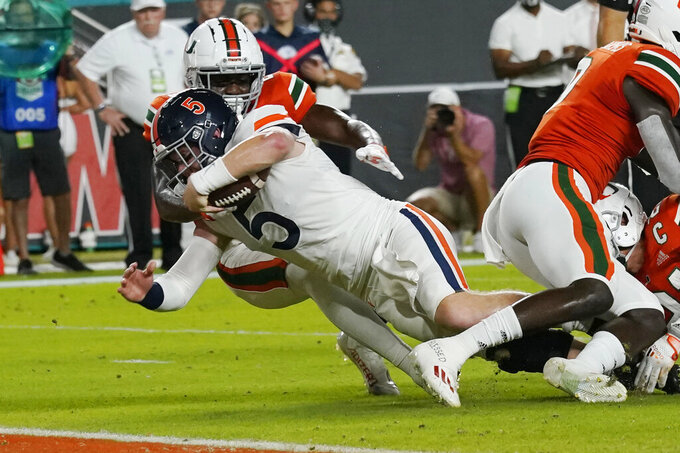 No. 14 Notre Dame at Virginia Tech. The Fighting Irish (4-1) are back to football independence after a one-year stint as full ACC members amid the COVID-19 pandemic. They’re coming off a home loss to No. 5 Cincinnati and they’re set to visit Justin Fuente's Hokies (3-1), who have won all three of their home games — including a season-opening takedown of then-No. 10 North Carolina. Saturday night marks the second of five games against ACC teams for the Irish. This is the toughest matchup in the current four-game homestand for Virginia Tech, which needs wins before closing with four of five on the road.

Virginia QB Brennan Armstrong vs. Louisville QB Malik Cunningham. These two won’t take the field together in the afternoon game, but they’re capable of putting up big totals to grab all the attention. Armstrong leads the ACC passing (394.6 yards per game), including a program-record 554 yards in a loss at UNC. Cunningham is a two-way threat whose 10 rushing touchdowns lead the ACC and are tied for second in the Bowl Subdivision ranks..

Does Florida State have a realistic shot to win at North Carolina? The Seminoles (1-4, 1-2) finally earned a win last week by beating Syracuse on a final-play field goal. The good news for this weekend is FSU has never lost to a Mack Brown-coached UNC team in 10 games, though all but one came amid the Seminoles’ run as a national power through the 1990s during Brown’s first stint with the Tar Heels. They upset a Tar Heels team ranked No. 5 last October. The bad news is the Tar Heels (3-2, 2-2) have been dominant at home and are a 17 1/2-point favorite according to FanDuel Sportsbook.

No. 19 Wake Forest (5-0, 3-0) is sitting atop the ACC standings entering Saturday’s trip to Syracuse with several notable early accomplishments. Dave Clawson's Demon Deacons are the highest-ranked ACC team in the AP Top 25 for the first time since September 2008. They’re 3-0 in the league for the first time since 2011 after last weekend's win against Louisville on Nick Sciba's late field goal. And they’re trying for the program’s first 6-0 start since winning the first seven in 1944 – nine years before the ACC’s inaugural season – and only the second time overall.

Georgia Tech’s Jeff Sims hasn’t had an easy time as a second-year freshman but has the potential for a big outing Saturday at Duke. He missed time with an injury suffered in the season opener but returned to run for three touchdowns and pass for another in a home rout of UNC. Sims threw for 359 yards and two touchdowns in last weekend’s loss to Pittsburgh.