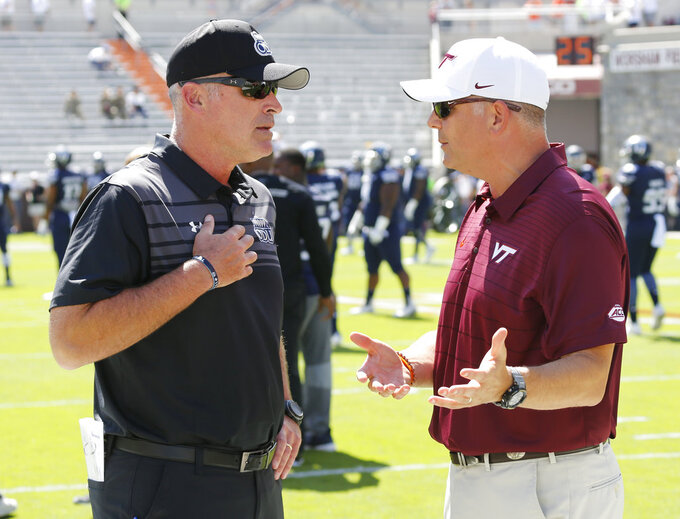 FILE - In this Sept. 23, 2017, file photo, Old Dominion head coach Bobby Wilder, left, greets Virginia Tech head coach Justin Fuente prior to the start of an NCAA college football game in Blacksburg, Va. Bobby Wilder and the Monarchs are excited about their rare opportunity to host at Top 25 program. No. 13 Virginia Tech makes the instate trek to the Tidewater area on Saturday. (AP Photo/Steve Helber, File)

A rare chance for Old Dominion to host a Top 25 team is also an opportunity that hasn't come along in while for No. 13 Virginia Tech: A chance for the Hokies to play in one of Virginia's most fertile recruiting areas.

The Hokies (2-0) haven't played in the Tidewater region since a 1986 matchup against Temple in Norfolk, but that will change on Saturday as they face the Monarchs at Foreman Field.

Virginia Tech coach Justin Fuente downplayed the idea that playing in the region that has been so productive for the Hokies on the recruiting trail is a major motivation. The coach instead focused on the opportunity to support an in-state program, and the Hokies' fan base in the area.

"I don't know that I've ever sat in front of a kid and he said, 'I'm coming there because you have one game scheduled three years from now in my backyard,'" Fuente said this week. "I don't know that that has ever been the straw that put the kid over the top, but I do think it's good. I think it's great for our fan base."

The Tidewater region has long been a favorite target of the Hokies, and the likes of NFL Hall of Famer Bruce Smith, Michael Vick and countless other high school players from the area have gone on to star in Blacksburg.

For the Monarchs (0-3), it's an historic opportunity, coach Bobby Wilder said.

Wilder is in his 12th year as the Monarchs coach, having been hired nearly two years before the program played it first game in the 2009 season. The game is the second of 13 meetings with the Hokies over the next 14 years. Six will take play in Norfolk.

"I never could've imagined when I was hired here that we would be hosting Virginia Tech, one of the top programs in the country and has consistently been a good program and the fact that this is the first of a number of times they will come to Old Dominion is exciting for all of us," Wilder said. "... We're looking forward to it but the number one thing were focused on right now is playing better football at Old Dominion that's what we need to do."

Virginia Tech is coming off an unexpected off-week produced when East Carolina pulled out of its game in Blacksburg early last week, citing fears over making the trip with Hurricane Florence taking aim at the state.

Old Dominion, meanwhile, is off to its worst start since resuming football. The Monarchs trailed Liberty just 14-10 at halftime, but lost 52-10; they led 17-0 at home against FIU but faded and lost 28-20; and they led Charlotte 18-13 early in the third quarter last week before the 49ers rallied for a 28-25 victory .

The struggles have caused Wilder to reopen the competition for playing time at several positions.

Fuente, meantime, said his team is well aware that taking care of the next game is priority one, even with a prime-time matchup with Duke and then a visit from No. 8 Notre Dame the next two games on the horizon.

"The thought of us just focusing on the next task is not foreign," Fuente said. "We do it in everything we do. In offseason, in spring, in fall camp, the notion of taking it one step at a time is not new to us.

"Look across college football and see what happened last week."

The chance to bring their game to fans in an area that is, at minimum, a 4-hour drive from Blacksburg, Fuente said, is a great way to reward them for their loyalty. But, he added: "We'll have to be ready to play."