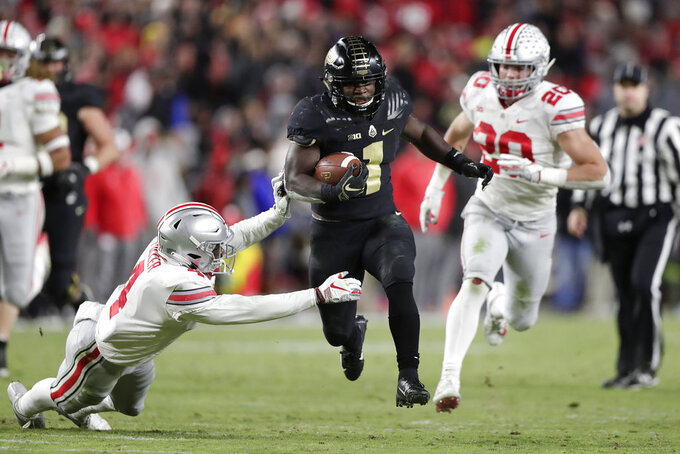 Purdue running back D.J. Knox (1) cuts between Ohio State safety Jordan Fuller (4) and linebacker Pete Werner (20) on his way to a touchdown during the second half of an NCAA college football game in West Lafayette, Ind., Saturday, Oct. 20, 2018. (AP Photo/Michael Conroy) 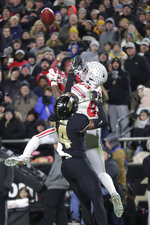 COLUMBUS, Ohio (AP) — A month ago, quarterback Dwayne Haskins Jr. was breaking school records and Ohio State was threatening to run the table and cruise into the College Football Playoff.

During Saturday's rout by unranked Purdue, however, problems that have nagged the No. 11 Buckeyes for weeks came home to roost: Their running backs couldn't break free, they couldn't score touchdowns in the red zone and the defense at times seemed to be on vacation.

The situation is so urgent that coach Urban Meyer pulled his assistants off the recruiting trail during the scheduled off week to figure out how to get it all fixed before Nebraska comes to town a week from Saturday.

After Nebraska, the Buckeyes (7-1, 4-1 Big Ten) have Maryland and Michigan State before finishing the regular season against No. 5 Michigan at home.

"This bye week is going to give us an opportunity to evaluate some schemes," Meyer said during the Big Ten coaches' teleconference Tuesday. "There are things we do well and things we don't. It's glaringly obvious what the issues are."

"You have to do a good job of assessing whether its execution, personnel or scheme," Day said. "We're kind of knee-deep in that right now."

Running backs J.K. Dobbins and Mike Weber have been shut down in the past three games against middling Big Ten teams as defenses crowd the box and keep offensive linemen from getting a push. Day said other short-yardage options, including slippery backup quarterback Tate Martell, are being evaluated to try to pick up more yards in the red zone. The offense has failed to score a touchdown in eight trips inside the 20-yard line in the past two games.

"(I'm) frustrated that we've done so many good things, yet didn't quite have a lot to show for it the other night," Day said. "We have to play better situationally. We've done so many good things, we've got a lot of good players on offense, we have to just make sure we're executing better in the red zone and when we need to run the ball, we've got to be able to run the ball."

The Buckeyes' defense has given up too many big plays and missed 20 tackles in the Purdue game, most of them in a disastrous fourth quarter that saw the Boilermakers score 28 points on the way to a 49-20 upset .

"I understand when you struggle people want to be able to say that's the reason, let's go," Schiano said. "But there's no one reason. The truth of the matter is we're actually making progress in all areas — there's some things I wish we'd make it faster.

"There is no one thing," he said. "It's not the linebackers, it's not the safety play and all those things that can be talked about. It's a combination of them all."

Schiano said the bye week came at an opportune time for a team making too many mistakes.

"We've had a chance this week — which is great — to really just look at us, not have to worry about a game plan for Saturday, not have to worry about stopping a certain opponent's plays," he said. "And it's been a good exercise. I think we're getting close, and just in the nick of time because we need to go out and play really good defense down the stretch if we're going to accomplish the goals we set out at the beginning of the year."