Only 8 ACC teams have bowl eligibility, and time running out 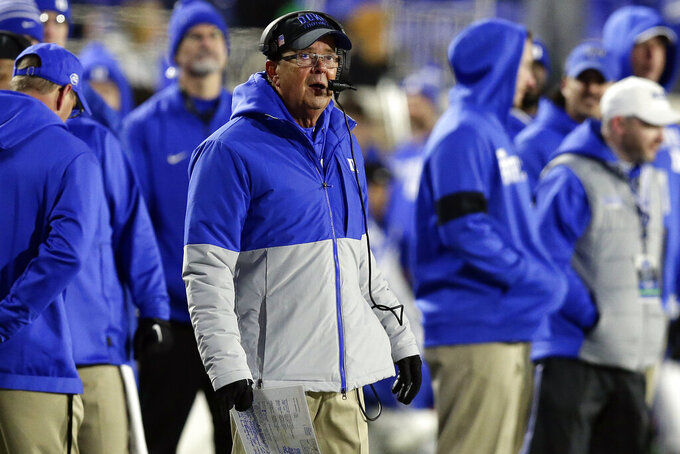 Duke head coach David Cutcliffe looks on from the sidelines during the second half of an NCAA college football game against Notre Dame in Durham, N.C., Saturday, Nov. 9, 2019. (AP Photo/Gerry Broome)

CORAL GABLES, Fla. (AP) — For the Atlantic Coast Conference, eight may not be enough.

Only eight ACC teams have secured bowl eligibility, and unless some teams find a way to rally that will mean the league will be sending fewer teams to the postseason than it has in any year since expanding to 14 schools in 2013.

Clemson, Louisville, Florida State, Wake Forest, Virginia, Pitt, Virginia Tech and Miami are all bowl-bound. Georgia Tech is the only ACC school that is eliminated from the bowl mix.

The good news for the league is five teams — Boston College, North Carolina State, Syracuse, North Carolina and Duke — still have a chance of getting to that six-win prerequisite. The bad news is that, with the exception of Boston College, those schools have no room for error. Boston College is 5-5, and the Wolfpack, Orange, Tar Heels and Blue Devils all carry 4-6 records into this penultimate weekend of the regular season.

"It's not easy for anybody in our football world," Duke coach David Cutcliffe said. "I mean everybody, everybody is suffering in some manner. Whoever supports players, whoever coaches the players and more than anyone else the players themselves. And I realized in 44 years of coaching I've only been a part of six losing seasons. I don't really have anything to complain about by any manner. This season is not over."

He's right: The season is not over.

But for those five still-hoping ACC teams, the end is perilously close. And for the Wolfpack and Tar Heels, one will likely have the chance to end the other's bowl hopes.

Boston College needs a win against either Notre Dame or Pitt to secure bowl eligibility. Duke — losers of four straight by a combined score of 155-44 — needs to beat Wake Forest and Miami. N.C. State, also losers of four in a row, needs wins over Georgia Tech and North Carolina. Syracuse needs to sweep Wake Forest and Louisville. North Carolina plays Mercer this weekend, then N.C. State in the finale.

If North Carolina misses bowl season, that'll be a third consecutive postseason-less year for the Tar Heels. But a win over Mercer would give the Tar Heels five wins in 2019 — matching the total for 2017 and 2018 combined, and in the mind of coach Mack Brown, that means relevance.

"It's like a playoff game for us," Brown said of Saturday's home finale against FCS school Mercer. "We've got to win two games to get to a bowl game. It's very obvious. It's out there for us."

It’s no guarantee that the ACC gets past eight bowl-eligible teams and of course that would be a bit of a blow.

The conference pools bowl revenue and shares it among ACC members, and fewer bowls would obviously mean less money to send around. The ACC had 11 bowl teams last season, 10 in each of the two years preceding that, nine in 2015, and 11 apiece in 2013 and 2014. The last time the ACC had fewer than eight bowl teams was 2012 — when it was just a 12-team league as opposed to the current 14-team one, and that was also a year where Miami and North Carolina had enough wins and would have played in bowls but neither school was eligible for the postseason.

The bowl chase is going on while the race for the ACC’s Coastal title — and the right to face Clemson for the conference crown — is still undecided. Virginia is atop the Coastal, and if the Cavaliers win the division it will cap a seven-year, seven-different-winners run on that side of the league. And in the mind of Miami coach Manny Diaz, the parity within the Coastal is just one of the reasons why it’s tough for teams to hit big win totals.

“Anytime you’ve got teams that are going to focus on playing great defense, what are the games going to be? They’re going to be competitive,” Diaz said. “That’s a game where anybody can beat anybody because they’re going to be low-scoring games or come down to one possession here or there. Obviously Bud Foster has been a legend at Virginia Tech forever.

“There’s going to be great defensive coaches in this division, and I think that’s why it’s always a different road to get through.”