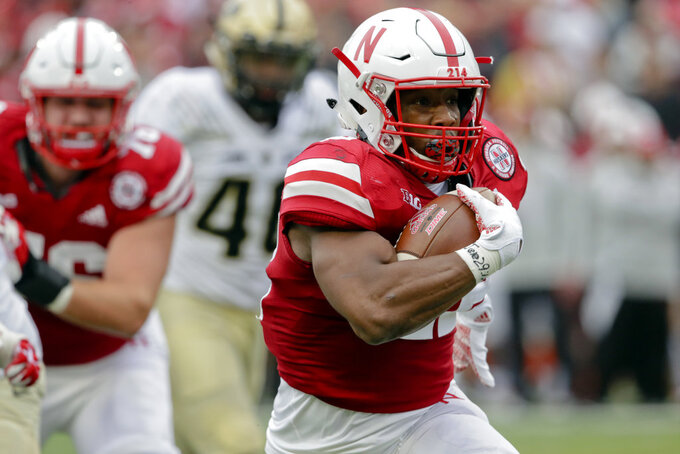 FILE - In this Sept. 29, 2018, file photo, Nebraska running back Devine Ozigbo (22) carries the ball during the first half of an NCAA college football game against Purdue, in Lincoln, Neb. His 493 yards and three touchdowns led the woeful Cornhuskers in rushing last season, but he’s become the team’s most-improved player this year. He’s compiled 710 rushing yards and eight touchdowns through eight games, while averaging 7.4 yards per carry. He’s reached the 100-yard mark in four of the past five games. (AP Photo/Nati Harnik, File)

COLUMBUS, Ohio (AP) — Nebraska's Devine Ozigbo had to convince two coaching staffs that he should be the featured running back. Not until this year did the senior firmly establish himself in the job.

Under new coach Scott Frost, Ozigbo has become the team's most-improved player. After leading the woeful Cornhuskers in rushing last year with 493 yards and three touchdowns, he's already piled up 710 rushing yards and eight touchdowns through eight games this season. He's averaging 7.4 yards per carry and has reached the 100-yard plateau in four of the past five games.

The 6-foot, 235-pound power back from Texas hasn't had an easy time getting there. He started this season third on the depth chart.

Ozigbo is stronger and faster after going through a conditioning program in the offseason with new strength coach Zach Duvall, who came with Frost from Central Florida.

"He's improved steadily and consistently since we got here," Frost said. "The best thing I can say about him is that he persevered through a competition with several other guys, even not being the starter to begin the season. Sometimes not giving up is the key to anybody's success, and he kept fighting and kept swinging."

Here are other Big Ten players who should be considered for the list of most improved:

Coughlin is a junior who leads the Big Ten with nine sacks and three forced fumbles. He credits his skills work with first-year pass-rushing specialist coach Marcus West for improvements in his technique.

Coughlin was already a key player last season, starting every game and leading the team with 6½ sacks and 11½ tackles for loss, but he has progressed to the role of game-changer for the Gophers up front.

In the Oct. 13 loss to Ohio State, he registered seven tackles, including three for loss, two sacks and forced one fumble.

"I think Carter is a great example of what we want our program to look like," coach P.J. Fleck said.

The senior has locked in as the starter for the Boilermakers after losing the job last season because of poor decisions and dislocating his ankle in November.

Hooker was good a year ago, making 56 tackles, but he's been an indispensable member of Iowa's young and talented back seven.

The junior safety already has 39 tackles with two interceptions, and he's played linebacker at times to help a defense that has struggled with injuries.

"He wasn't highly recruited, but we just really liked him," Iowa coach Kirk Ferentz said. "When he showed up, pretty much everything he's done has been good. He's got a great attitude."

Victor, a junior, is coach Urban Meyer's pick for most improved Buckeye.

He's had to compete with a deep and experienced corps of receivers for playing time and looks from quarterback Dwayne Haskins. He'll get more now as a starter in place of Austin Mack, whose season was ended by a foot injury.

"He didn't have a great spring, and he's playing at a pretty high level," Meyer said. "He's still a little bit up-and-down, but when he goes, he's a really talented guy."