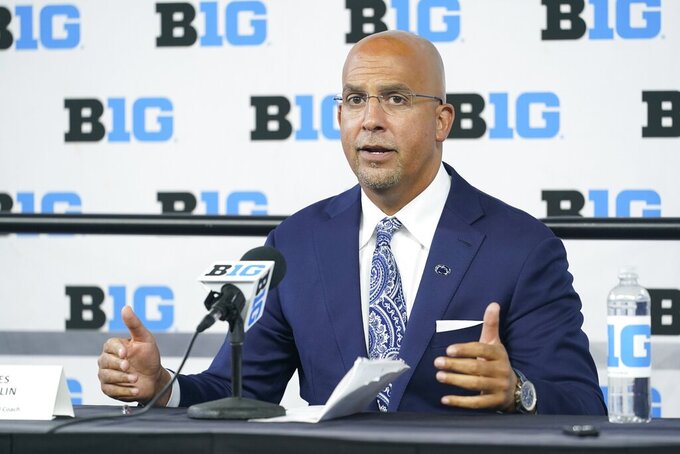 INDIANAPOLIS (AP) — Penn State quarterback Sean Clifford steered away from questions at Big Ten media days about his recent conversation with the leader of a group trying to organize college football players and toward preparation for the season.

Clifford's meeting with Jason Stahl, a former member of the faculty at the University of Minnesota and the executive director of the College Football Players Association, drew attention last week when a social media post suggested Penn State players were forming a union.

Clifford backed away from that with a Twitter post of his own. He did say he recently had “very positive and open discussions” with Penn State coach James Franklin, new AD Pat Kraft and Big Ten Commissioner Kevin Warren about “changing the landscape of college sports.”

Warren said Tuesday at the opening of media days the Big Ten would create a Student-Athlete Advisory and Advocacy Committee.

Stahl took to social media to accuse Penn State and the Big Ten of trying to quell any movement by the players to organize.

Kraft said no such thing happened and said he was happy to have conversations with Clifford about trying to address concerns of athletes — from health care to financial benefits.

“I’m proud of Sean and our other kids for being honest and come and asking questions,” Kraft said.

As for Clifford, he tried his best to keep the focus on the field.

“We are five days away from camp,” the sixth-year senior said. "And, you know, that’s the main thing right now, but just to address what happened: Do I want to make change for college athletics and college athletes across the country? Absolutely.

So when the Buckeyes were shut out of all three last season for the first time in a decade, the 11-2 mark and Rose Bowl win simply wasn’t good enough for the Buckeyes or their fans. And he knew it.

“The expectation is to win them all,” Day said. “I said that in my opening press conference when I was named the head coach, and that’s just the way it is. Maybe at some places 11-2 with a Rose Bowl victory is a good year. It isn’t at Ohio State.”

Rutgers linebacker Drew Singleton is hoping the NCAA will grant him an extra year of eligibility this season.

Singleton declared for the NFL draft and signed with an agent before the Scarlet Knights were a last-minute bowl addition following the opt-out of No. 23 Texas A&M. Unlike Rutgers’ other pro prospects Singleton decided to play in the 38-10 loss to Wake Forest and wound up injuring his ankle.

After going undrafted, his waiver application was denied. Coach Greg Schiano said Wednesday the school has appealed so Singleton can pursue a graduate degree.

“We’re hopeful that cooler minds prevail,” Schiano said. “We have an appeal in. I’m hopeful he will be able to come back. He wants to seek his graduate degree. I believe that -- he does so many great things. He’s a kid from inner city Newark who’s overcome a lot. The guy is trying to do the right thing. I hope that we’re able to do the right thing and get him back.”

Now, he’s back — perhaps playing an even bigger role for the Nittany Lions defense as he continues to add beef to an already massive 321-pound frame. And in Indianapolis, Mustipher and his coach, James Franklin, chowed down at one of Indy’s most familiar steakhouses, St. Elmo’s.

As usual, Mustipher held nothing back.

“PJ ate one of the biggest steaks I’ve ever seen in my life, biggest piles of mashed potatoes, ate the shrimp. I didn’t tell him about the cocktail sauce beforehand,” Franklin said. “Then also ordered a full separate meal of two lobster tails that are massive. And he crushed it all. He said he was kind of enjoying himself because he’s passed the conditioning test. He’ll never have to run the Penn State conditioning test again.”

Mustipher downplayed the impressive feat, saying he eats 22- or 24-ounce steaks once a week.

Narduzzi, a former defensive coordinator for the Spartans, said on a podcast audience that the ACC champs would have beaten Michigan State badly – if Kenny Pickett had played in the Peach Bowl. Pickett opted out of the game and wound up as the only quarterback selected in the first round of the NFL draft.

Tucker, who was 11-2 in his second season in East Lansing, sidestepped the question.

“I really prefer not to get into hypotheticals,” he said, “especially games that were played in the past and decided on the field.”