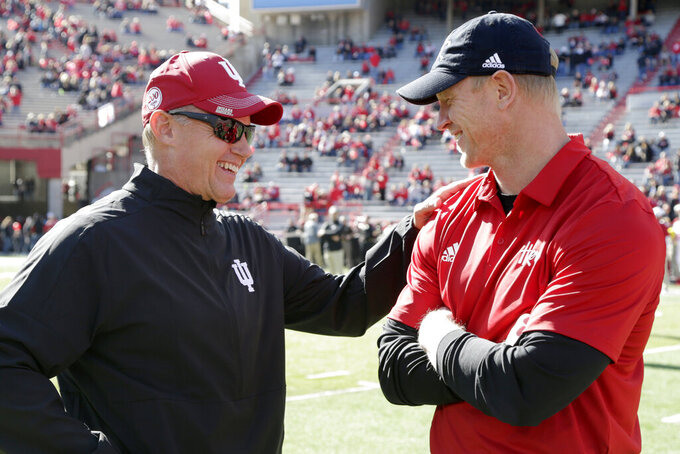 Purdue and Nebraska took time this week to look long and hard at what's ailing their programs.

On Saturday, everyone will find out whose message broke through.

"There comes a time and place when you have to rip some tails, honestly. That's what we did," Frost said, explaining the critique was not personal and team captains supported the move. "I still feel like that is what we are missing a little bit, just the guys caring enough to do their job perfect on Saturdays and practice all the time. It is close, but, we can't do those little things and shoot ourselves in the foot. We are not a good enough team right now."

Nebraska's struggles have mystified a fan base hoping to reclaim the glory days.

But since Frost returned to his alma mater last season, the Cornhuskers (4-4, 2-3 Big Ten) have won only eight games, haven't been ranked since September and are just 1-7 outside Lincoln. Now, after a 38-31 home loss to Indiana, the Cornhuskers hope to turn things around at Purdue.

In the four games since, Purdue has lost three times and Brohm's high-scoring offense has scored just 73 points, 18.3 per game. Worse, Purdue now finds itself needing to win its final four games just to become bowl-eligible.

While Brohm knows it won't be easy for a young team decimated by injuries, he expects a better performance than the one he watched last week in driving rain, a 24-6 loss to Illinois.

"We've got to work through this, and I think the only way to do that is to evaluate each performance weekly, make corrections, identify them, talk about them and figure out ways to improve," Brohm said. "Then you come back and work your tail off to get better and gain confidence to go on the field and play better football. I think our guys will do that."

Frost hasn't named a starting quarterback, but Adrian Martinez says he's ready to go. Martinez injured his left knee against Northwestern on Oct. 5 and didn't play against Minnesota and Indiana — both losses. Noah Vedral and Luke McCaffrey have been taking the snaps in Martinez's absence. Frost said Martinez would have been available in a pinch last week against the Hoosiers.

"I feel like my arm's juiced up and everything's recuperated," Martinez said. "I'm ready to be back and I'm fired up."

Nebraska receiver-running back Wan'Dale Robinson , who leads Big Ten freshmen with 111.5 all-purpose yards per game, is looking forward to seeing Moore, his training partner. Robinson, from Frankfort, Kentucky, and Moore, have been training at a Louisville gym for three years. Moore played high school football in Louisville.

"We were just competing and always going back and forth with each other and that helped us out," Robinson said. "He's part of the reason how I even got here today, seeing how he is and how he approaches the game and things like that. He's just been a really big help."

Just days after Indiana athletic director Fred Glass complained Frost and his staff were disrespecting the Hoosiers' program, Nebraska faces a team Frost offended last year. Moments after a 56-10 loss at Michigan, Frost said the Huskers had played a "really good team and we get a game that we could win next week." Purdue responded by beating the Cornhuskers 42-28 in Lincoln. In the lead up to the game, Brohm said Frost's comment had been "heard," and during the coaches' postgame handshake Purdue running back Markell Jones walked past Frost and mockingly said, "we had a winnable game."