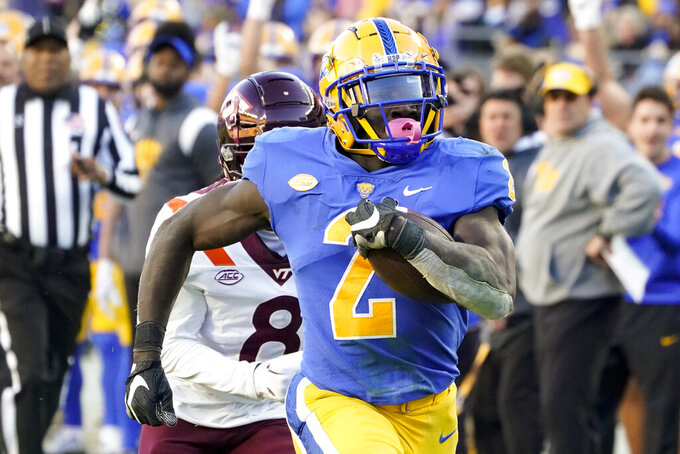 Pittsburgh running back Israel Abanikanda (2) runs the ball past Virginia Tech defensive back Brion Murray (8), scoring one of his six touchdowns of an NCVAA college football game against Virginia Tech, during the second half Saturday, Oct. 8, 2022, in Pittsburgh. Pittsburgh won 45-29. (AP Photo/Keith Srakocic)

Line: Louisville by 2 1/2 according to FanDuel Sportsbook.

Both teams are coming off byes and seeking to follow up ACC wins. The visiting Panthers aim for their eighth consecutive road win after being more than a month at home. Louisville seeks its first winning streak this season and its first victory over Pitt since 2012. The schools haven’t met in Louisville since 2011, when both were Big East Conference members.

Louisville’s ground game vs. Pitt’s rushing defense. The Cardinals average an ACC-best 207.2 yards per game, largely fueled by mobile quarterback Malik Cunningham (457 yards, nine touchdowns). Cunningham missed the Virginia victory with concussion-like symptoms but is expected to play. Louisville still came close to breaking 200 yards for the fourth time this season with Trevion Cooley running for 77 yards and backup QB Brock Domann adding 71 with a TD. They’ll face a Panthers run defense ranked fifth in the ACC and yielding 125.3 yards per contest. As usual, they're among the nation's leaders in sacks and rank 12th with 19 for 130 yards.

Pitt: Running back Israel Abanikanda is the nation’s all-purpose yardage leader (186.17 per game) and is coming off a school-record 320-yard, six-TD performance against Virginia Tech. His 830 yards and 12 TDs lead ACC rushers and includes 177 against Rhode Island and 154 against Tennessee. He can become the Panthers’ first 1,000-yard rusher since 2018 and can match Tony Dorsett by reaching that level in just seven games.

Pitt’s road winning streak is the nation’s second longest active behind Georgia’s nine-game roll. ... The Panthers have won six of the last seven meetings, including 23-20 at home two years ago. ... Pitt head coach Pat Narduzzi is third on the program’s all-time win list with 57. Pop Warner is up next at 60. ... Louisville is tied for third nationally with 23 sacks, including seven against the Cavaliers. The Cardinals also rank 11th with 46 tackles for loss.