Rising to occasion: QB leads No. 14 Utah to great heights 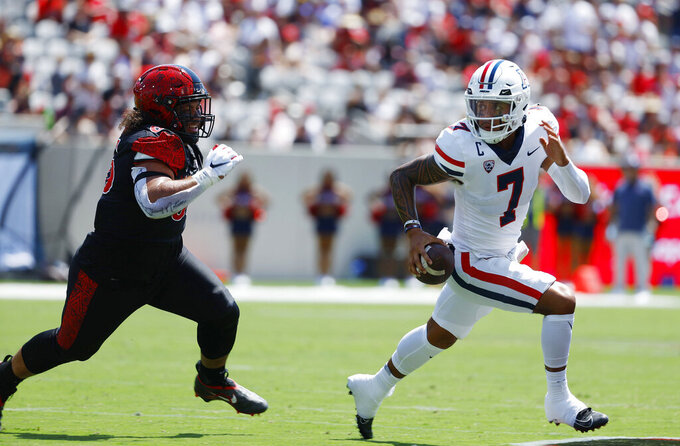 The rise of Cameron Rising can be traced to almost exactly a year ago, when the Utah quarterback came off the bench and nearly rescued the Utes in a three-overtime loss against San Diego State.

Rising shined and the Utes had their QB.

Rising has gone 10-3 as a starter since providing a late spark in the 33-31 loss to San Diego State last September. He went on to guide the Utes to a Pac-12 championship and a spot in the Rose Bowl.

“He can run and get out of problems, extend plays. He’s a really good football player,” said San Diego State coach Brady Hoke, whose team enters as a 20 1/2-point underdog, according to FanDuel Sportsbook.

One of the things Whittingham appreciated about Rising was his rosy outlook last season, even after initially losing the starting job to Charlie Brewer. Down 24-10 midway through the third quarter in the third game of the season, Rising stepped in and forced overtime against San Diego State with two late TD passes.

“His number was called. He responded, and he absolutely was ready,” Whittingham said. “From that point forward, we never looked back.”

The quarterback from California who began his career at Texas started this season on a sour note by throwing a late interception in the end zone during a 29-26 loss at Florida. Rising bounced back with a three-touchdown, 254-yard performance last weekend in a 73-7 rout of Southern Utah. That was all before halftime, too.

“He’s just got this leadership ability that not many people have,” Utah tight end Dalton Kincaid said. "He gets people to want to play for him. The O-line wants to play harder for him, everyone around him.”

Rising, a team captain, certainly has the attention of the Aztecs.

“Their offense seems more elusive when Cam comes in,” said Aztecs senior safety Patrick McMorris. "It’s a whole different game when he’s back there at QB."

While watching film of San Diego State, Whittingham made sure to pay attention to the Aztecs’ season opener against Arizona — a team the Utes host on Nov. 5.

"It’s not your focal point, but you’re going to make mental notes,” Whittingham said. “Of course, when you get to that particular game week you’ll watch it all again. But yeah, there are things you can make note of.”

With a victory over the Aztecs, the Utes can earn win No. 300 all-time against Mountain West opponents. They were in the conference until moving to the Pac-12 in 2011.

What’s more, Utah is 28-4 in nonconference games during the regular season since joining the Pac-12, including 19-0 at home.

San Diego State returner Jordan Byrd got the Aztecs going against Idaho State last weekend with a 66-yard punt return for a score. He later scored on a 53-yard run in a 38-7 win.

Byrd had a 100-yard kickoff return for a score last season against Utah.

“Just going out there, having fun, helping the team out," Byrd said. "It’s what I love to do.”

Before he transferred to San Diego State from Virginia Tech (2019-21), quarterback Braxton Burmeister suited up at Oregon and played in 11 games with the Ducks (2017-18). Burmeister is coming off a contest against Idaho State where he threw for 108 yards and a score, along with rushing for 80 more and a touchdown.

The Utes have five touchdowns this season out of a trio of tight ends, including two by Kincaid and another from Thomas Yassmin. Opposing teams can't focus all the attention on All-Pac-12 tight end Brant Kuithe, who has 12 grabs for 127 yards and two scores.

“They’ve got some guys who are really talented at the line of scrimmage,” Hoke said.