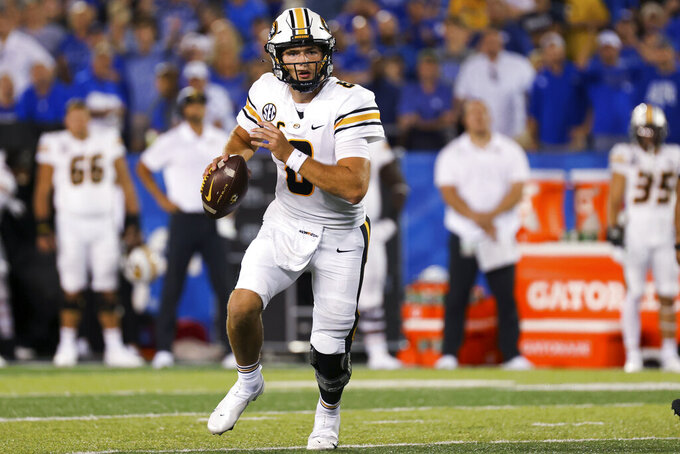 Missouri quarterback Connor Bazelak (8) looks for an open receiver during the second half of an NCAA college football game against Kentucky in Lexington, Ky., Saturday, Sept. 11, 2021. (AP Photo/Michael Clubb)

Rodriguez rushed for a career-high 206 yards and two of his three touchdowns.

The Wildcats (2-0, 1-0) never trailed this thrilling showdown for the early East Division lead but had to overcome squandering a 28-14 lead as Missouri (1-1, 1-1) eventually tied the game early in the fourth quarter. Kentucky answered by taking the kickoff and quickly marching 75 yards, helped by Rodriguez’s 28-yard run and Will Levis’ 28-yard pass to tight end Justin Rigg to the Tigers’ 8.

Rodriguez fumbled after Devin Richardson's tackle as he barged in on the next play with 11:28 remaining and Cox recovered it, though Rodriguez was credited with the TD after a review upheld the ruling on the field. However, on Monday Kentucky announced that the SEC reviewed the play and reversed the initial and awarded Cox with the score.

Missouri had a final chance to tie after blocking Kentucky’s field goal attempt, but turned it over on downs as Connor Bazelak’s pass intended for Dominic Lovett was broken up by Kentucky's Carrington Valentine with 1:30 left.

Rodriguez, who surpassed his previous best of 149 yards against Vanderbilt last November, carried 27 times with TD runs of 2 and 3 yards. The junior also had a 5-yard TD catch, his first, on Kentucky's opening drive. Levis completed 10 of 18 passes for 179 yards, a TD and an interception off a tipped pass.

Most importantly, Kentucky controlled the line of scrimmage, an effort that totaled 340 yards rushing with Rodriguez leading the way.

“Just me communicating with the (offensive) line,” said Rodriguez said. “After every series we would come off and talk about what’s going on and where to hit (the line) at. I just trust those dudes.”

The Wildcats outgained the Tigers 519-398 to avenge last year’s loss in Columbia that marked their flattest effort of the season. They held two-TD leads three times before letting the last one slip away to a Missouri squad that wouldn't give up.

Bazelak made sure of that by completing 34 of 52 attempts for 294 yards and four touchdown passes, including a 17-yarder to Tyler Badie early in the fourth that tied the game. But he also threw an interception early in the third that Kentucky turned into a Rodriguez TD.

Badie contributed multiple ways for Missouri with 10 receptions for 88 yards and 14 carries for 61 in a workman-like performance. That was the Tigers' pattern all night as they drove 75 yards or longer for all four TDs but fell short of completing a spirited comeback.

“I’m really proud of this team and everyone, just the way they competed and kept taking the punches they were throwing," Bazelak said. "We fought back and threw punches back. So I’m proud of how we competed. We didn’t let up, we didn’t give up, even when we were down two touchdowns.”

Kentucky: Whether they’re able to challenge Georgia or Florida in the East remains to be seen. But the Wildcats held tough despite committing two turnovers, one of which led to a TD, and letting Mizzou break loose for two long TDs.

“It is my job to get it a little cleaner,” Kentucky coach Mark Stoops said. “We have to finish teams. We had an opportunity at the end of the first half, and I’m absolutely pleased with how we started the second half.”

Missouri: Credit the Tigers’ resilience for answering every time they seemed on the verge of falling three touchdowns down. But they couldn’t stop Kentucky’s ground game or Rodriguez, who made it look easy against the defense.

Kentucky returns to nonconference play against Tennessee-Chattanooga on Saturday.