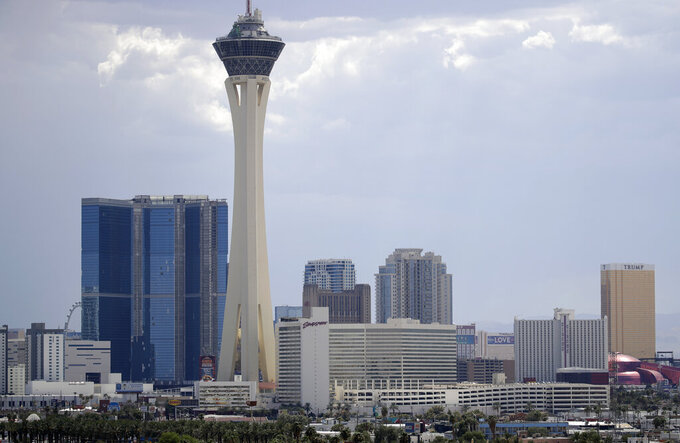 The city is set to bid on nearly a half dozen different NCAA championship events, including women's basketball.

The NCAA will start accepting bids Monday on nearly two dozen sports championships over all three divisions. This is the first year that Las Vegas is eligible to bid after the governing body for college sports indefinitely suspended a ban last year that prevented events from being hosted in states that accept wagers on single games.

George Kliavkoff, who is MGM's President of Entertainment and Sports, told The Associated Press last week that his group — in conjunction with the Las Vegas Convention and Visitor Authority — plan on bidding to host women's basketball as well as at least five other sports. Those could include the Frozen Four, wrestling and women's volleyball championships.

"We're looking for scaled opportunities. Sports that attract lots of fans and some places we can reconfigure the way the events are held to attract more fans," he said.

Kliavkoff thinks Las Vegas is positioned well for women's basketball and its potential new regional format. The NCAA women's basketball committee suggested earlier this month changing the format for the regionals starting in 2023 by having two cities host eight teams each in the Sweet 16 instead of having four sites.

"Nevada is such a great place and Las Vegas is such an excellent place to hold a championship or regional," Kliavkoff said. "We're uniquely positioned since we have T-Mobile Arena, MGM Garden Arena and Mandalay Bays. We have three event centers. We have knowledge how to do this. There are dozens of hotels in town that have price points for every fan. We're a city that's easy to get to with direct non-stop flights from almost everywhere in the country."

Moving to a two-site format, the committee noted, would elevate and enhance the student-athlete experience, enhance broadcast coverage, create opportunity for growth of the sport and championship, build the brand of women's basketball and expand programming targeting strategic plan initiatives that were announced in the NCAA Women's Basketball Strategic Plan.

"We'll see how it falls out as bids come in," NCAA vice president for women's basketball Lynn Holzman said. "It's new ground we're treading. Moving from four to two sites for regionals."

While Holzman wouldn't say whether Las Vegas has a leg-up on other cities, she is very familiar with basketball tournaments being played there. She was commissioner of the West Coast Conference, which has played its tournament in Las Vegas for the last decade.

Las Vegas would have no problems hosting eight teams and their fans in the new format. It would make sense for the NCAA to look at having one site on the West Coast and one on the East Coast for the new format to help with television windows for their partner ESPN. MGM also operates the arena in Springfield, Massachusetts, so the company could bid for an East Coast site, as well.

Mohegan Sun, which has hosted many college basketball events, as well as a WNBA team, has said it is considering bidding for the regional, too.

With regionals available from 2023-26 and the Final Four in 2025 and 2026, Kliavkoff said that he expects Las Vegas to put in a series of bids for them and other NCAA events.

"For the sports we're interested in, we'll try and get as many yeses as possible," he said. "We'll bid for multiple years. It probably will depend on the different sports we bid for. We think there are benefits to being a known place you come back every year."

The NCAA said it would help Las Vegas and other cities learn the details of putting in bids. The college governing body is hosting a NCAA Championship Hosting Symposium on Sept. 18. Women's basketball future sites will be announced in October 2020.

While the men's basketball Final Four isn't in this bid cycle, regionals are available from 2023-26. The men's basketball committee visited Las Vegas earlier this year and toured the new Oakland Raiders football stadium that will be ready next year, as well as T-Mobile Arena. Las Vegas would be interested in hosting those regionals as well. Potentially they could host the men's and women's regionals in the same year.

"Basketball is slowly realizing that Las Vegas is the second home for basketball in the United States," Kliavkoff said. "We have the summer league, the G-league. We are in discussion on bringing more here. We have the Aces. We have more and more college tournaments. This is the home for lots of AAU tournaments, high school tournaments and 3-on-3 basketball. We think of this as one of the best basketball homes in the country and continue to build on that. We'll put in bids for the years that are available. By definition, the men's and women's basketball will be overlapping a few years and we will be bidding on them."

With over 100,000 hotel rooms on the strip and the three venues, hosting both the men's and women's regionals wouldn't be a problem.

The College Football Playoff has two more championship game sites still to be chosen during the 12-year contract with ESPN that runs through the 2025 season. CFP operates outside the NCAA and is essentially run by the FBS conference commissioners. It is not obligated to follow NCAA rules.

The new Las Vegas stadium could be a contender to host. The stadium will host a bowl game matching the Pac-12 and Southeastern Conference, starting with the 2020 season. The Pac-12 championship game is also moving to Las Vegas. The conference announced earlier this year it will play its title game in Las Vegas in 2021 and '22.