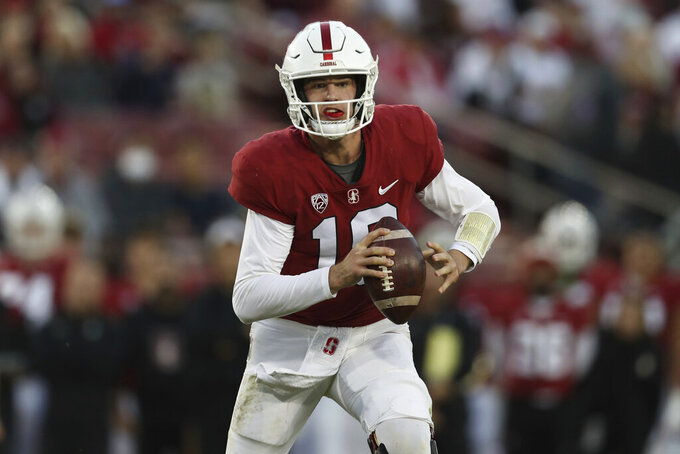 FILE - Stanford's Tanner McKee looks to pass against California during the first half of an NCAA college football game in Stanford, Calif., on Nov. 20, 2021. Stanford has embraced bringing in players such as McKee after their two-year Mormon missions, valuing their life experience. (AP Photo/Jed Jacobsohn, File) 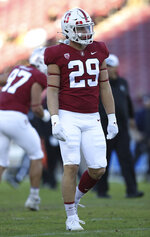 STANFORD, Calif. (AP) — The homesickness and depression began to overwhelm Houston Heimuli about four months into his mission for The Church of Jesus Christ of Latter-day Saints. Away from his family for the first time, the gesture of a stranger in his congregation made all the difference in keeping him going.

A man in Indianapolis handed the 18-year-old Heimuli a glove that had belonged to his father — autographed, no less — from Lakei Heimuli's time as a star fullback on the 1984 BYU national championship team.

“He’s like, ‘I got this when I was a kid, I heard you’re here and I wanted to give this to you, I hope this helps you out, whatever you need, I’m here,’” Heimuli recalled. “Actually it made me cry a bit. That was a super moment and I still have it, the glove of my dad with his name on it from 1984.”

That moment became a significant turning point, and Heimuli learned a key lesson from those two years he now shares with his Stanford football teammates: “Don’t be afraid to lean on people.”

It's a theme for the close-knit Cardinal — who play their final home game of the season Saturday night against Notre Dame — and exactly the kind of story and example coach David Shaw encourages Heimuli and five other Latter-day Saints players to discuss to help teammates through a challenging time, or even a triumph.

Like the traditions at BYU and Utah of embracing young men joining an athletic program after their two-year missions with the church, Shaw is committed to making it work at Stanford. Defensive coordinator Lance Anderson is a member of the Latter-day Saints, and a big reason these players are coming to the Bay Area — the assistant coach leads the recruiting efforts in Utah, where many of these players live.

“I’ve had this conversation with all the guys that come back off these missions. I say, ‘You went out in the world, you experienced things, you grew, different than these young people that just came out of high school and came here,’” Shaw said. “‘Don’t keep that a secret. Whatever you gleaned, whatever you learned, however you’ve grown, express that, so those guys can benefit from your experience.’”

Because the Latter-day Saints players are two years older than their freshman football counterparts, Shaw leaves it to them to speak up when the timing feels right.

Sophomore quarterback Tanner McKee appreciates the platform to make a difference by sharing his stories and lessons, but doesn't push too hard. Teammates regularly ask the Latter-day Saints players about their respective mission trips.

Players who took missions say there's a special sincerity involved that earns them respect — others listen and respond even if they don't share the same beliefs.

As a young boy, McKee imagined a mission trip one day taking him to Brazil. That's where he landed, spending 21 months in the Curitiba area of southern Brazil.

Heimuli has been there for teammates through overwhelming moments such as the death of a loved one.

“I wouldn’t say I was like an anchor, but I will say that for some guys on the team I try to give my voice and try to give them a little, not pep talk, but kind of a spiritual chat, like, ‘Hey, man, I know this is tough, here’s my experience with it. I know it’s not the same as yours, but just know someone’s there for you,’” the fifth-year senior said. “There have been times when whatever shoulder you can lend goes a long way.”

Fifth-year outside linebacker Gabe Reid served his mission in his father's homeland of American Samoa and also Western Samoa. Junior inside linebacker Levani Damuni lived in Auckland, New Zealand, and the Cook Islands.

Tangaloa Kaufusi, a senior outside linebacker from Salt Lake City, spent his mission in Taiwan, and fellow linebacker Spencer Jorgensen traveled to Thailand.

“In terms of what I took away from my mission and what I brought back with me to football and being at Stanford, the biggest thing was just appreciating the little things and the simple things,” said Reid, who saw many families with almost nothing.

McKee lost about 25 pounds while away, and Damuni had to regain his fitness after putting on 45 pounds with regular starchy meals of fish and chips.

“I'm a much better version of myself than I would have been coming straight out of high school,” Damuni said.

The Latter-day Saints players gather regularly to provide support and spiritual guidance for each other. In the locker room, they aren't looked at as outsiders, but rather teammates who already have gained invaluable life skills such as being self-reliant in the real world.

“Everyone's very accepting and loving," Reid said, “and if anything, I think the fact that we're different makes us stronger.”