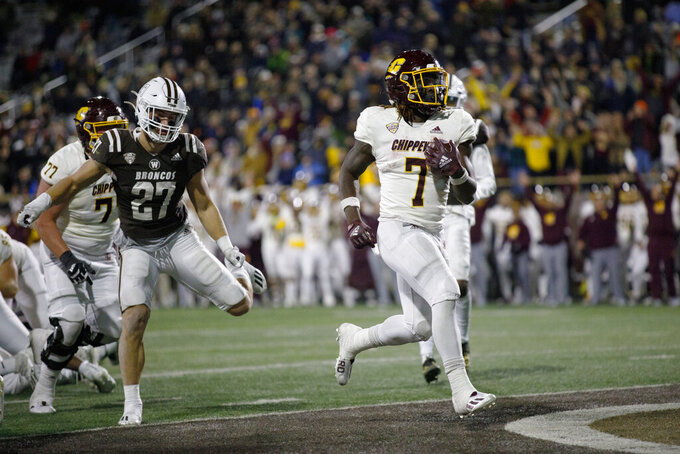 A new name appears at the top of the Football Bowl Subdivision rushing chart after Central Michigan's Lew Nichols III turned in his second straight 200-yard game and Michigan State's Kenneth Walker III had his least productive game of the season.

Nichols became the first Central Michigan player since 2014 to put together consecutive 200-yard games. He had a career-high 219 yards and three touchdowns on 32 carries in a 37-17 win over Ball State on Wednesday. He had 215 yards and four TDs in a 54-30 win over Kent State on Nov. 13.

The 5-foot-10, 220-pound Nichols was a three-star recruit out of Detroit in 2019 and was expected to split carries with Kobe Lewis this season. But Lewis was injured in preseason practice and is out for the season, leaving Nichols to carry the load for the Chippewas.

Through five games Nichols ranked 53rd in country at 81 yards per game. His average has more than doubled, to 185.2, over his past six games.

Walker was limited to six carries for 25 yards, both season lows, in Michigan State's 56-7 loss at Ohio State. Spartans coach Mel Tucker said Walker was banged up, and that's why his workload was limited.

There were five other 200-yard rushing performances over the past week to raise the total to 40 for the season.

Louisville's Malik Cunningham ran 11 times for 224 yards and two touchdowns against Duke on Thursday, and Toledo's Bryant Koback ran 21 times for 203 yards and four TDs against Ohio on Tuesday.

Alabama's Bryce Young set the national season high for passing yards in a game with 559 against Arkansas, the most since Central Florida's Dillon Gabriel threw for 601 against Memphis in October 2020.

Young became the first Crimson Tide player to throw for 500 in a game. The previous high was 484 by Scott Hunter in 1969.

Hawaii linebacker Darius Muasau became the first player this season to force three fumbles in a game, doing it against Colorado State. Muasau also hit the 100-tackle mark for the second straight year.

Before Saturday, the Cowboys hadn't recorded a shutout since an 84-0 win over Savannah State in 2012. Savannah State was in the Football Championship Subdivision at the time.

UCLA's 62-33 win over Southern California was the most offensive of the 91 games between the crosstown rivals.

The combined 95 points were the most in the series, the 62 points were most scored by UCLA against the Trojans and the most given up in a single game by the USC since 2013. The 29-point margin was UCLA's largest since a 34-0 win in 1954.