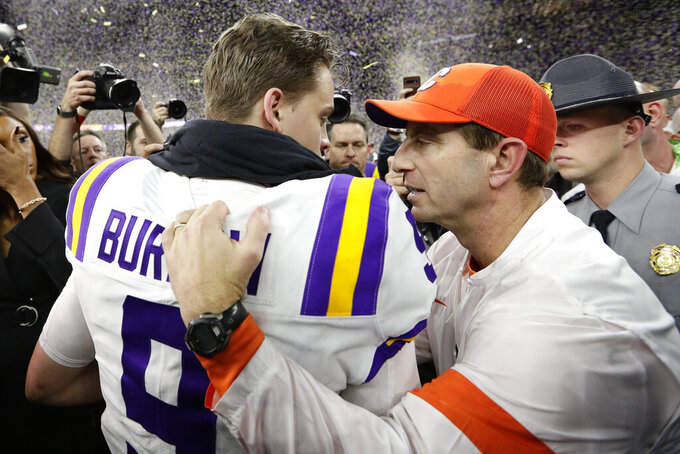 Joe Burrow won the Heisman Trophy, the national championship and set the Football Bowl Subdivision record for touchdown passes in a season.

It probably won't bother him that Anthony Gordon was the nation's leading passer for a Washington State offense that has produced the most yards through the air in four of the last six seasons.

Burrow, the ninth quarterback and 16th player to win the Heisman and national title in the same season, ended the season with 60 TD passes against just six interceptions. Twelve scoring passes came in the College Football Playoff. His total broke the FBS record of 58 by Hawaii's Colt Brennan in 2006.

Burrow went into the championship game against Clemson on track to set the FBS season completion record. He just missed bettering Colt McCoy's 76.7% rate for Texas in 2008. Burrow finished at 76.2%.

Chuba Hubbard won the national rushing title, and he announced Monday he'll return to Oklahoma State to defend it. With 2,094 yards, he was among four players over 2,000. His nation-leading 161.1 average on a nation-high 328 carries edged out Navy's Malcolm Perry (155.2).

Perry ran for a school bowl-record 213 yards in a 20-17 Liberty Bowl win over Kansas State, and his 2,017 rushing yards were most by a quarterback in FBS history. Perry led the nation with 26 runs of 20 yards or longer.

CHASE TO THE TOP

Ja'Marr Chase's third 200-yard game of the season pushed him into a virtual tie with Arkansas State's Omar Bayless for top receiver.

Chase, the Biletnikoff Award winner for LSU, caught nine balls for 221 yards and two touchdowns against Clemson. That increased his average to 127.1. Bayless averaged 127.2 after a huge performance against Florida International in the final regular-season game.

No surprise, LSU was the top overall offensive team. The Tigers averaged national highs of 568.4 yards and 48.4 points and were second with 401.6 passing yards per game.

Central Florida was second in total offense (540.5 ypg) and Oklahoma (537.6) moved past Clemson (528.7) for second. Clemson's 394 yards against LSU were its fewest since September.

The Bulldogs finished with the top scoring defense after Clemson gave up 42 points to LSU, the most it has surrendered since 2016. Georgia allowed 12.6 points per game, just ahead of San Diego State (12.7). Clemson ended up third with an average of 13.5.