Terps, Mountaineers face off in first meeting since 2015 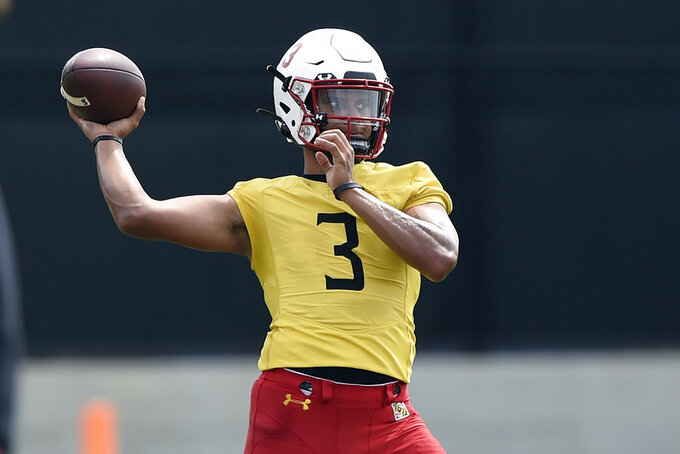 COLLEGE PARK, Md. (AP) — In both of Michael Locksley's stints as a Maryland assistant, the Terrapins would play West Virginia regularly.

To him, this series is significant — although the teams haven't met in a while.

“I think the people, the former players, and our fans that are really traditional Terp fans understand that this is a regional, border rivalry," said Locksley, now the head coach at Maryland.

Maryland hosts West Virginia to open the season Saturday in the first meeting between the teams since 2015. These schools first played each other in 1919, then didn't face off again until 1943. Since then, the rivalry has been a reasonably constant one, although there have been some gaps.

The teams played every season from 1980-2007, and again from 2010-15. Locksley was a running backs coach at Maryland from 1997-2002 and an offensive coordinator from 2012-15. Maryland's best recent stretch in the series was winning four games in a row from 2001-03, including two victories in the 2003 season, when the teams met in September and then again in the Gator Bowl.

Lately, the series has been all West Virginia. The Mountaineers have won nine of the last 10 meetings.

It makes sense for these teams to face each other in a nonconference game, since both are fairly recent arrivals in the Big Ten and the Big 12 — leagues with teams that are generally farther out toward the center of the country. But although Maryland and West Virginia are about 200 miles apart, there may not be much familiarity between the programs this year. They haven't met in a while, and in last year's pandemic-shortened season, the Terps played only five games.

Maryland also has new coordinators on both sides of the ball and on special teams.

“We’re trying to use our best guesses on what we’re going to see,” West Virginia coach Neal Brown said.

West Virginia went 0-4 on the road a year ago. The Mountaineers are starting the season with a true road game for the first time since 2005.

“I’m glad we’re on the road to start off. I really am,” Brown said. “We had some struggles there last year. We’re looking to play much improved than we did a year ago on the road. We need to get the bad taste out of our mouth.”

Taulia Tagovailoa, the brother of the Miami Dolphins' quarterback, is entering his second season at Maryland. He shined at times for the Terps last year, but West Virginia allowed only 160 yards passing a game in 2020, the top mark in the nation.

“We just did our job,” Mountaineers safety Alonzo Addae said. “We went into each game with a game plan that the coaches gave us. Nobody tried to do too much. I think that can be an issue, especially at this level with the skill level of offensive players and the skill level of offensive coordinators. When you get your eyes in bad places, when you try and do somebody else’s job, normally bad things happen.”

Brown said he would like to see college football go the route of the NFL by having teams practice with each other in the preseason.

“Until you go out and play a game, I’m not sure that you know what you have,” Brown said. “I think the college system has flaws. ... High schools have scrimmages. NFL teams have preseason scrimmages and then they have dual practices. I think there’s a model out there in college football that we should explore that gives us an opportunity.

“I don’t know if we need to scrimmage because our numbers are so low. But I think there’s a way to practice with another team, even maybe somebody at a lower level, just to line up and play against somebody other than yourself."

Maryland had a different leader in yards receiving in each of its five games last season, and all five of those players return. Now the Terps will be tested against the West Virginia secondary.

“I feel like if we just do what we've got to do and really do our job, we can really find ways to exploit their defense and really just find ways to create matchup problems for them,” receiver Dontay Demus said.