Texas pressured to back up promise the Longhorns are 'back' 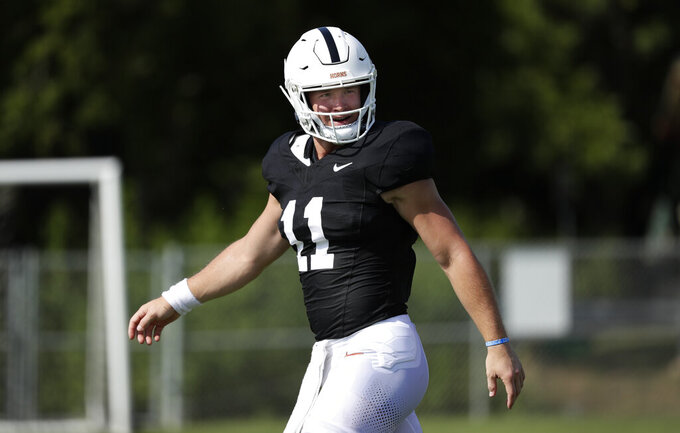 AUSTIN, Texas (AP) — Texas had just demolished Georgia in the Sugar Bowl when quarterback Sam Ehlinger shouted to the Superdome rooftop the two words Longhorns fans until then had only been willing to whisper.

"We're ba-aack!" Ehlinger said as coach Tom Herman stood nearby with a half grin, half grimace look on his face.

Texas was back, all right. Back to 10 wins, back to Big 12 title contender, back into the top 10. But can Texas stay there or will 2019 bring more frustration to a storied program that has spent many recent seasons squarely in the camp of mediocrity?

Only Ehlinger and a defense that loses eight starters can answer that.

As a dual threat quarterback, Ehlinger he had a breakout season in 2018 with 25 touchdowns passing and 16 more running, and is the team leader Texas has been looking for since Vince Young and Colt McCoy. He also got help with experienced targets at wide receiver, an improving offensive line and talent in the backfield.

"We're extremely confident in where we're at as a program right now," Ehlinger said. "We're going to do everything in our power to be the best that we can be. And the best we can be will be a lot of fun."

But about that defense ...

The Longhorns dominated Georgia's high-powered offense and produced several big moments in 2018, but also struggled against some of the Big 12's best passing teams. And they won't have much time to get the new guys ready with Southeastern Conference championship contender LSU coming to Austin on Sept. 7.

Texas opens the season Aug. 31 at home against Louisiana Tech.

The junior is a tough, gritty player, but not the most durable, missing most of two games last season because of shoulder and neck injuries. Texas won both because it had experienced backup Shane Buechele to step in. Buechele has since transferred to SMU and another top backup, Cameron Rising, transferred to Utah. That leaves untested redshirt freshman Casey Thompson as the guy behind Ehlinger when needed. Given Ehlinger's history, expect him to be called on.

Big wide receiver Collin Johnson is Ehlinger's favorite target, but it will be 5-foot-11 Devin Duvernay who could produce the biggest plays. The Longhorns were the only Power Five team without a 50-yard play from scrimmage last season. Herman wants Duvernay to get more chances to change that. Duvernay caught 41 passes last season without a drop and scored four touchdowns.

Texas is confident it has the depth to make up for lost experience on the defensive line. A bigger concern is the secondary after losing both starting cornerbacks. Jalen Green and Anthony Cook get the first crack at stepping in and will be pressed to deliver in what could be a weak spot for 2019.

Texas has had a 1,000-yard rusher just once since 2007 and that came in a losing season in 2016. Keontay Ingram was Texas' top rusher in 2018 with 731 yards and averaged 5 yards per carry. The sophomore came to training camp at 225 pounds, 25 pounds heavier than his freshman season, and Herman said he is still running faster than a year ago. A productive running game would help protect Ehlinger from wear and tear.

The program is all in on Herman, even the fans. That wasn't the case after season-opening losses in 2017 and 2018. But after 10 wins and the Sugar Bowl victory, Herman got a two-year contract extension through 2023 and season ticket sales are soaring near the school record of 62,500 set in 2010 (which ended in a 5-7 disaster). The hype will only increase if Herman unseats Lincoln Riley and the Oklahoma Sooners as Big 12 champions.