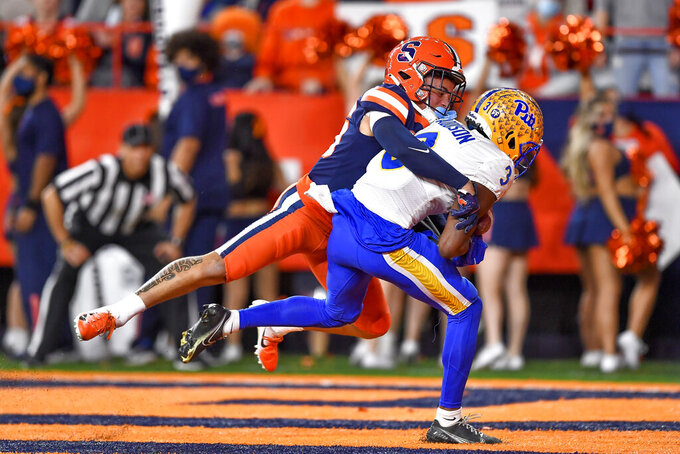 It’s the first time since 2014 that Clemson, with its recognizable sea of orange, won’t be playing for the title after the Tigers dominated the ACC football landscape the past six seasons.

“It’s going to be really weird not seeing orange in the championship, right?" said Eric Mac Lain, a college football analyst for the ACC Network. “Or the garnet and gold (of Florida State) — two colors we’ve been very accustomed to seeing on at least the Atlantic side for quite some time now.”

Pitt was selected to finish fourth in the Coastal division in the ACC’s preseason polls. Wake Forest was picked to finish fifth in the Atlantic.

“Clemson’s been dominant, and they’re still dominant,” Pitt coach Pat Narduzzi said. "... They’re going to be a force to be reckoned with every year. But Pitt, we hope, is the same way. Wake Forest, the same way. Virginia, the same way. Everyone’s got a chance. That’s the beautiful thing.”

Both teams reached the title game behind strong quarterback play, which could lead to a shootout.

The Demon Deacons rank third in the country in scoring offense at 42.9 points per game, while the Panthers are fourth (42.8). Both teams also rank in the top 15 nationally in total offense, passing offense and touchdown passes.

The over-under for the game is listed at 72 1/2 points, according to Fan Duel Sportsbook.

Pitt is led by quarterback Kenny Pickett, who has thrown 40 touchdown passes this season.

He needs two more to break the conference record set by Clemson's Deshaun Watson in 2016. A projected top 10 pick in next year’s NFL draft, Pickett's 79 career TD passes are tied with Dan Marino for the most in school history.

The sophomore has thrown for 3,711 yards and 34 touchdowns to lead a team with plenty of experience and loaded with “super seniors.” Hartman is the first ACC quarterback since Louisville’s Lamar Jackson in 2016 to have at least 30 TDs passing and 10 TDs rushing in a season.

“When we went into the season, I said this to the staff, ‘’We’ve been really good. We’ve been consistent. We’ve been to five consecutive bowls.' But we didn’t ever have that one breakout season,” said Wake Forest coach Dave Clawson, who recently signed a long-term contract extension. “I don’t want to put pressure on us. But I really believed that if we were going to have that breakout year, this year’s our best opportunity.”

It will be a missed opportunity for the ACC because whoever wins won't advance to the College Football Playoff as Clemson has done for the last six seasons. This year marks the first time the ACC won't send a representative to the four-team tournament.

While the quarterbacks attract most of the attention, much of their success has come thanks to the play at receiver for both teams.

Pitt’s Jordan Addison leads the country with 17 TD grabs, one shy of the ACC record held by Clemson's DeAndre Hopkins. Addison ranks sixth in FBS with 112.8 yards receiving per game.

For the Demon Deacons, third-year sophomore A.T. Perry is tied for second in FBS with 13 TDs and 22nd in yards receiving per game (92.7). There’s also Jaquarii Roberson (eight TD grabs), who joins with Perry in representing Wake Forest’s latest successes when it comes to developing receivers capable of making tough, contested catches.

Third-down conversions will be a key area to watch in this one when it comes to Wake Forest’s offense against Pittsburgh’s defense.

The Demon Deacons are tied for sixth in the Bowl Subdivision ranks by converting 50% of third-down chances, while the Panthers are seventh in FBS by holding opponents to a 31.3% conversion rate.

The Panthers are also second in FBS with 46 sacks, with Pitt linebacker Phil Campbell III pointing to the defense’s “Delta” package as a way to get after quarterbacks.

Wake Forest’s defense has had its share of struggles since the start of October, notably surrendering 56 points in a shootout win at Army and giving up 58 and 48 points in losses to North Carolina and Clemson, respectively.

But Wake Forest is coming off a 41-10 win at Boston College that clinched the Atlantic Division title that included holding the Eagles to 182 yards, the fewest allowed by the Demon Deacons all year.

“We showed what we’re capable of,” linebacker Luke Masterson said. “And it’s all about just repeating that and improving on the stuff that we did last weekend."

Wake Forest coach Dave Clawson has to feel pretty good if this game comes down to a Demon Deacons field goal attempt. Kicker Nick Sciba has made 89.3% (75-of-84) of his field goal attempts during his career, the third-best mark for any kicker in NCAA history with a minimum of 50 attempts.

The last four ACC title games have been major blowouts with Clemson crushing Notre Dame (34-10), Virginia (62-17), Pitt (42-10) and Miami (38-3). But with no dominant team in the conference, oddsmakers are expecting this game to be much closer. Pitt is listed as a 2 1/2-point favorite, according to Fan Duel Sportsbook.

AP Sports Writers Aaron Beard and Will Graves contributed to this report.