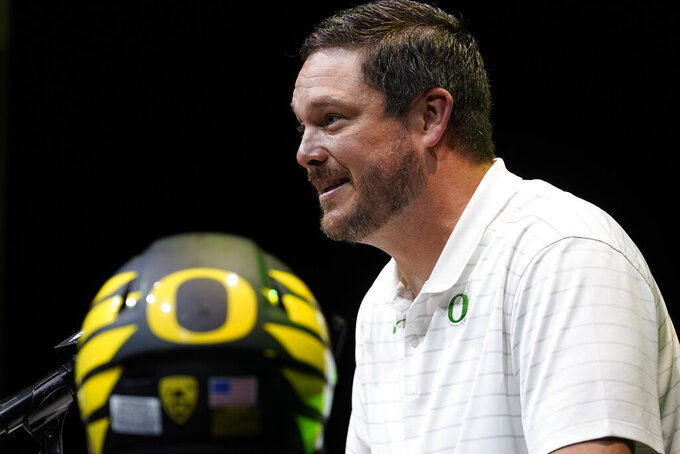 The first big weekend of college football is bursting with storylines and intrigue.

Pac-12 defending champion and seventh-ranked Utah goes to “The Swamp” for Billy Napier's first game as Florida's coach. No. 23 Cincinnati, coming off its historic College Football Playoff appearance, is an underdog in its opener at No. 19 Arkansas.

The “Backyard Brawl” returns for the first time since 2011 when No. 17 Pittsburgh hosts West Virginia on Thursday night. And there's also the Brian Kelly era at LSU opening on Sunday against Florida State in New Orleans, a matchup of two storied programs looking to return to the upper echelon of the sport.

It is an absolute smorgasbord for The Associated Press weekly What to Watch rundown, presented by Regions Bank.

Oregon-Georgia would be intriguing even without the Lanning-Smart connection. The Ducks are bidding to return to the top of the Pac-12 after Utah ended their two-year run as champion. Georgia is trying to stay on top of the Southeastern Conference, and nation, after supplanting Alabama.

The 36-year-old Lanning was Smart's defensive coordinator the past three seasons. Oregon hired him Dec. 11 after Mario Cristobal left for Miami. Lanning stayed on for Georgia's national championship run.

Lanning led a grieving Oregon team through preseason practices following the July death of tight end Spencer Webb and now takes his Ducks to Atlanta for their second opener in four years against a ranked SEC opponent at a neutral site. The 2019 Ducks lost to an Auburn team quarterbacked by Bo Nix, who transferred to Oregon after last season and is expected to start against Georgia.

Georgia will unveil a new-look defense. The favored Bulldogs, who had five defensive players taken in the first round of the NFL draft, will break in seven new starters on that side of the ball.

Ryan Day's offseason mission was to put Ohio State back in position to contend for a national title. The Buckeyes slipped last year, losing to Michigan for the first time since 2011 and seeing their four-year run as Big Ten champion end.

The most important move was hiring Jim Knowles away from Oklahoma State to shore up an underperforming defense, and the preseason reviews are good. Offense should be no problem with C.J. Stroud surrounded by many of the playmakers who helped the Buckeyes average better than 45 points per game.

Marcus Freeman, a linebacker for the Buckeyes from 2004-08, begins his first full season as Notre Dame coach, and quarterback Tyler Buchner will make his first start against the favored Buckeyes.

There’s no better stage for an opener: two bluebloods meeting at night in Ohio Stadium.

Alabama's Bryce Young begins his bid to win a second Heisman Trophy, a feat accomplished only by Ohio State's Archie Griffin in 1974-75.

The opener against Mountain West champion Utah State is a good test for Young and an offense fitting together some new pieces.

Young was sacked 39 times last season — only four teams attempted more passes than Alabama — and his line will be breaking in two new starting tackles. Young also will have to find his go-to receivers following the departures of stars Jameson Williams and John Metchie.

7 — Nebraska's consecutive losses by single digits, the most by a team since 1936, according to ESPN Stats & Info.

54 — Illinois offensive lineman Alex Palczewski's number of games played, making him the FBS' active career leader. He has made 53 starts.

Purdue is a slight underdog for its first Blackout Game at Ross-Ade Stadium since 2018. The Boilermakers blew out a third-ranked Ohio State as a two-touchdown underdog that night.

Purdue is getting a lot of love following a nine-win season that included two wins over top-five opponents and ended with an overtime bowl victory over Tennessee. Aidan O’Connell is out to build on one of the best passing seasons in program history, and the Boilermakers bring back eight starters on defense.

Penn State was ranked No. 4 following a 5-0 start last year and lost six of its last eight. QB Sean Clifford returns, but there are lots of questions about the Nittany Lions as they attempt to rise from middle of the pack in the Big Ten East.

Nebraska's patience with fifth-year coach Scott Frost has just about run out. The only way he survives that Week Zero loss to Northwestern in Ireland is if he beats Oklahoma on Sept. 17 and makes real progress in the Big Ten West.

He has yet to show he has the chops to coach in the Big Ten, having gone 15-30 since returning to his alma mater after his fabulous Central Florida run.

The Huskers host North Dakota and Georgia Southern the next two weeks, then Oklahoma visits before an open date. Oct. 1 is a key date. That's when Frost's buyout drops from $15 million to $7.5 million.