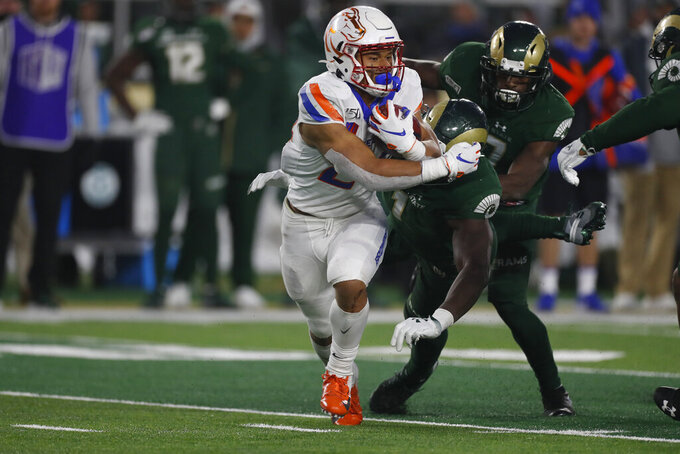 College football Saturdays this season have mostly been over by around midnight Eastern. Maybe 12:30 a.m.

West of Texas, the only FBS program that has been up and running is BYU in Provo, Utah.

That comes to end this weekend with the kickoff of the Mountain West season. The conference postponed fall football Aug. 10, the day before the Big Ten and Pac-12 made similar decisions.

The Mountain West reversed course and decided not long after those Power Five conferences to play an abbreviated season. The Big Ten starting this weekend has drawn the headlines, but the Mountain West will extend the football-watching day into Sunday for fans East of the Mississippi.

The marquee matchups on opening weekend include Mountain West favorite and defending champion Boise State hosting Utah State. Wyoming visits Nevada in a matchup of teams picked to finish second in their respective divisions. Both of those games kickoff at 7 p.m. ET.

The late show includes UNLV at San Diego State, the favorites to win the West Division, and Air Force at San Jose State, both kicking off at 10:30 p.m. ET.

Huge game in the Big 12. The Cowboys (3-0) are the only team in the conference with an overall unbeaten record, but they haven't payed in a while because of a COVID-19 postponement by Baylor last week.

The Cyclones (3-1) have gotten off to the most impressive start in the Big 12, beating TCU, Oklahoma and Texas Tech — after losing a nonconference game to Louisiana-Lafayette.

Oklahoma State should have quarterback Spencer Sanders (ankle) available to boost its offense.

The game matches two of the best running backs in the conference in Iowa State's Breece Hall, who leads the Big 12 in rushing, and Oklahoma State All-American Chuba Hubbard.

The fifth-ranked Buckeyes open their season at home against Nebraska. Fields was one of the preseason Heisman front-runners, but then the season went sideways.

Fields will try to make up for loss time as Clemson's Trevor Lawrence, BYU's Zach Wilson and Alabama's Mac Jones have had a month's head start in the Heisman race.

This has a chance to be a grand opening for Fields and the Buckeyes. They are 26-point favorites against the Cornhuskers. Ohio State has won five straight in the series and four of them have been huge blowouts, with the Buckeyes scoring 53 points per game.

12.3 — Points allowed per game by No. 9 Cincinnati, tops in the American Athletic Conference. The Bearcats play at No. 16 SMU, which is averaging 42.6 points per game, second in the conference.

13 — No. 2 Alabama's winning streak against Tennessee. The Tide has won the last four by an average of 34 points.

20.32 — Yards per catch last year by Minnesota receiver Rashod Bateman. The All-American originally opted out of the season, but when the Big Ten came back so did he. The 21st-ranked Gophers host No. 18 Michigan.

You might not have noticed, but Rice has not played a game yet, even though Conference USA has been in full swing since September.

COVID-19 issues set the Owls back, but they decided to stick with it and now start what is slated to be a six-game season.

Rice is coming off a three-win season and starting year three under coach Mike Bloomgren.

Middle Tennessee (1-5) might represent the Owls' best chance to get a victory.

Not only has Texas lost two straight on the field, but there is touchy situation developing about whether the football players will stand for the playing of the “The Eyes of Texas” after the game.

That is if the band even plays it.

Winning puts everybody in a good mood and right about now it would be great for Herman if his team could put everybody with any interest in Texas football in a good mood.