Wofford coach knows what it's like to win at Clemson 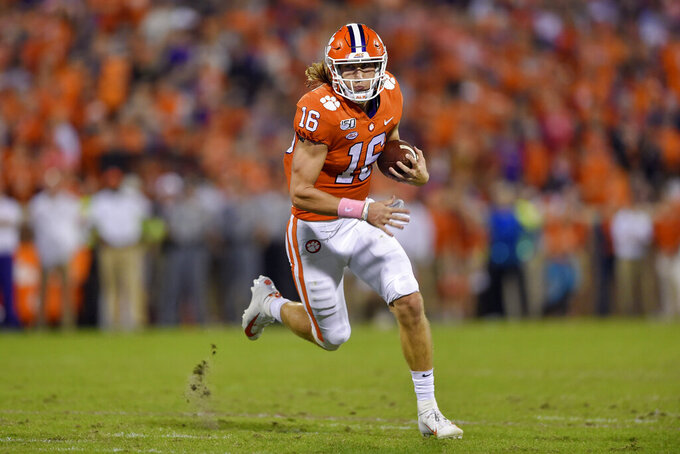 CLEMSON, S.C. (AP) — Wofford coach Josh Conklin is different than most opponents for No. 4 Clemson — he knows what it's like to win at the Tigers' Death Valley.

Conklin was the defensive coordinator at Pitt in 2016 when the Panthers stunned the then second-ranked Tigers 43-42 , Clemson's last home loss. Conklin, in his second year with the FCS program, has no illusions about the Terriers (5-2) stopping Clemson's latest run of success when the teams' meet Saturday.

"That's the biggest thing when you go at them as an FCS school, you look at them and say, 'Who do you take away?'" Conklin said. "You go down the list (of Tigers) and where does it stop?"

That's been a question for most opponents the past few years when facing Clemson (8-0), which has won its past 23 games and has only lost four games total the past five seasons. The Tigers are ranked in the top four nationally in both offense and defense and have outscored their past three Atlantic Coast Conference opponents 149-31.

"It's not a matchup," Conklin continued, "that's advantageous for us."

Especially given the Tigers are a perfect 33-0 against FCS since the NCAA formed the classification in 1978. Five of those have come against Wofford, although they haven't all been Tiger blowouts. Clemson coach Dabo Swinney remembers Wofford's trip to Memorial Stadium in 2011 when the Terriers carried a 24-21 lead in the third quarter before falling to Clemson 35-27.

Swinney recalled getting booed running off the field at the half with the game tied at 21-all with fans telling newly hired offensive coordinator Chad Morris (current Arkansas head coach) to "go back to high school" after the performance.

Those same fans will be screaming loudly again if Clemson can't do what's expected and put the Terriers away in a hurry.

"I know this is a team that doesn't necessarily match up well with us on paper," Swinney said. "But as I always say, you don't play the game on paper. You play the game and there is plenty of history of FCS teams beating FBS teams."

That would certainly be an even bigger upset for Conklin's club than his last appearance at Clemson.

Some other things to watch when Wofford plays No. 4 Clemson:

The Terriers are located in Spartanburg, about an hour's drive from Clemson's campus. They're two-time defending Southern Conference champions and have reached the FCS playoffs in six of the past nine seasons. Wofford's basketball program also had an NCAA impact, defeating Seton Hall in the opening round before taking Kentucky to the wire in a 62-56 second-round loss.

Clemson tailback Travis Etienne is one rushing score away from matching James Davis for the school's all-time lead at 47 TDs on the ground. Etienne had three TDs rushing as he played little over a half in the Tigers' 59-7 victory over Boston College.

Clemson's Swinney is unsure if starting defensive end Xavier Thomas will be back this week from his concussion. He missed the past two games after the entering the concussion protocol for a hard hit at a mid-week practice. Thomas has started four of the Tigers first six games.

Wofford had been in playoff mode much of the season after opening 0-2. The Terriers say getting the chance to step out of the Southern Conference race and take on the Tigers is a nice break.

Clemson's offense is seeking a couple of firsts this week. The group hopes to score 45 or more points for a fourth straight game, something no team in school history has accomplished. They're also looking for a fourth game with 600 or more yards of offense, surpassing the previous season best set by teams in 2012, 2017 and 2018.