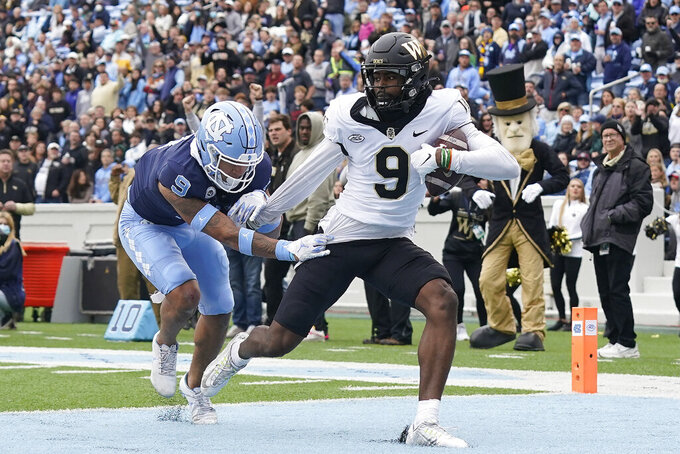 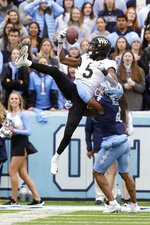 WINSTON-SALEM, N.C. (AP) — The ball sailed his way, and Wake Forest’s A.T. Perry had a step on his defender. He extended his right arm into his opponent's shoulder to maintain that sliver of sideline separation and corralled the ball with his left – pinned between his forearm, biceps and chest – while remaining in stride as he crossed the goal line.

That impressive catch helps illustrate why the 13th-ranked Demon Deacons are putting up points in bunches and leading the Atlantic Coast Conference. While quarterback Sam Hartman is thriving, Perry and Jaquarii Roberson have been prolific as Wake Forest’s latest successes in developing receivers into reliable targets capable of making contested catches.

“Some catches are always better than others in the way you catch it,” Roberson said. “But yeah, there’s definitely some pride and some excitement … after you make that catch. Some people probably don’t realize it was a really tough catch because it kind of looks easy on television or whatever.

“But those catches are tough to make, and when you make it, it’s exciting and it’s fun. And you’re ready to catch another one just like it.”

Perry, a 6-foot-5 third-year sophomore, entered the week tied for third in the Bowl Subdivision ranks with 10 touchdown grabs, one off the national lead. Roberson, a 6-1 fourth-year junior, was tied for 10th with eight for the Demon Deacons (8-1, 5-0 ACC), who host No. 21 North Carolina State on Saturday night.

They're the only FBS teammates with at least eight TD catches each, as well with both ranking in the top 20 in receiving yards (Roberson is 16th at 94.2 per game, Perry is 17th at 93.9).

There are several examples, too.

In last month’s win against Syracuse, it was Perry coming through with three TD grabs – the last a twisting adjustment to a slightly underthrown ball as he fell backwards for a walk-off overtime winner.

Two weeks later, Roberson had a leaping turnback grab on an end-zone deep ball against two defenders in a shootout win against Army.

And each had two TDs in last week’s loss to North Carolina in a game designated as a nonconference matchup, from Perry's one-armed sideline snag to Roberson pulling in a back-pylon throw with his fingertips.

“He’s that perfect balance of being such a great teacher of the offense and individual skills, and he’s demanding,” Clawson said. “But his players trust him so much.”

Higgins, The Citadel's former head coach, said he prefers recruits who play multiple sports. With Perry and Roberson, that meant watching both play basketball — with the transferrable skill of going up for the ball in traffic — in his scouting work.

The Demon Deacons redshirt most prospects for to build strength, study schemes and learn technique, down to exactly how to carry the football for a program typically among the nation's best in turnover margin under Clawson. Perry and Roberson are products of that process.

“The neat thing about both of those guys is I think they really do understand that they’ve got a long way to go in terms of refining their game," Higgins said. "And that makes my job easier because there is a humility about them.

"They take coaching. They want to get better. … I think so much is just selling them on the vision of what this thing can look like, giving them that picture day in and day out, and then showing them how to get there.”

A few more could steer Wake Forest into next month's ACC championship game.