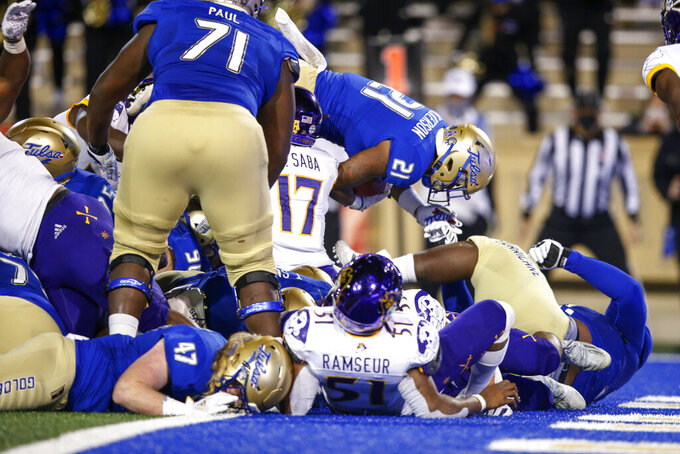 Tulsa running back TK Wilkerson (21) leaps into the end zone for the go-ahead touchdown with under a minute left during an NCAA college football game Friday, Oct. 30, 2020, in Tulsa, Okla. (Ian Maule/Tulsa World via AP)

The American Athletic Conference said Saturday that replay officials in the East Carolina-Tulsa game erred when overturning a fumble call that would have ended what turned out to the the Golden Hurricane’s game-winning drive.

Tulsa scored the go-ahead touchdown with 29 seconds left Friday in what turned out to be a 34-30 victory against the Pirates at home. But it came after an apparent fumble by a Tulsa ball carrier and recovery by ECU with 1:52 left in the game.

The ruling on the field was a turnover, but replay officials determined the runner had regained control of the ball before he was down, and when it came loose the play should have been over.

The American said it reviewed the game and found the runner did not regain possession of the ball, and the ruling on the field awarding the ball to East Carolina should not have been reversed.

The American said it communicated its findings to East Carolina and Tulsa, but it gave no word on whether the replay officials would face a penalty.