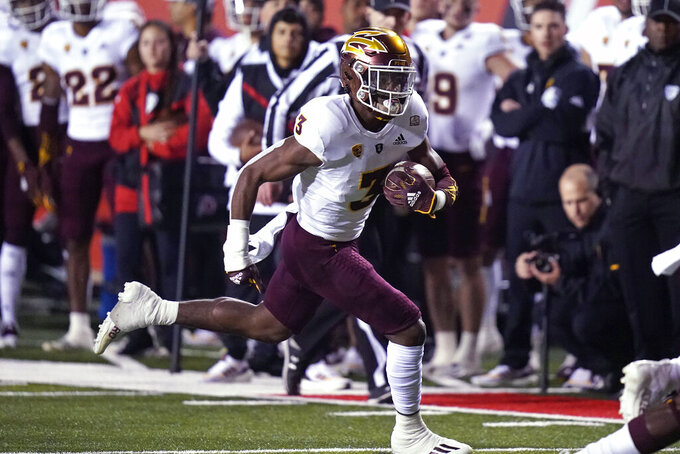 Arizona State running back Rachaad White (3) carries the ball against Utah during the first half of an NCAA college football game Saturday, Oct. 16, 2021, in Salt Lake City. (AP Photo/Rick Bowmer)

TEMPE, Ariz. (AP) — Arizona State had a week off to rest, recover and shake off a second-half meltdown in a loss to Utah.

It also gave Sun Devils coach Herm Edwards a chance to do a little writing.

“I wrote the leaders a letter, told them what I expected," he said. "Sometimes I think when you talk to them in person, that’s one thing, but when they can read it and look at it, the message really sinks in. I’ve always been that person that when I get a letter from somebody, I really focus in on what it says, and I can read it over and over again. It’s my job to inform players on where we are at.”

Edwards is hoping his old-school letter campaign will sink in heading into Saturday's game against Washington State.

Arizona State appeared to be in good shape at halftime, leading by 14, but then the bottom fell out. Utah scored 28 straight points in the second half and won 35-21, making the Sun Devils' bid to win the South a much closer race.

“Every game is important and it gives you momentum," Edwards said. "We lost it and we want to get it back. We have some good leaders on this team and the next five weeks they need to be leaders.”

Washington State needs its leaders to step up after coach Nick Rolovich was fired.

Rolovich and four assistant coaches were fired on Oct. 18 for refusing to adhere to the state's vaccination mandate. The Cougars (4-4, 3-2) tried to gather themselves against BYU five days later, but ended up losing 21-19 with defensive coordinator Jake Dickert serving as acting head coach.

“It’s a little bit learning on the fly,” Dickert said. “I felt it was really smooth. For the most part we operated as a staff.”

The nonconference loss didn't hurt the Cougars in the Pac-12 at least. They're still in the North Division race, a half-game behind No. 7 Oregon and Oregon State.

The Sun Devils will need all the help they can get against Washington State's passing game.

Sophomore quarterback Jayden de Laura has been solid in his first year as the starter, throwing for 1,733 yards and leading the Pac-12 with 15 touchdown passes.

Washington State also is the only team in the Pac-12 featuring two receivers with over 500 yards apiece. Veteran slots Calvin Jackson Jr. (528 yards) and Travell Harris (525) have combined for 92 receptions and nine touchdowns.

The Sun Devils are 33rd nationally with 200.1 yards per game and lead the FBS with 37 rushing TDs over the past 10 games.

Washington State has struggled against the run, allowing at least 200 yards four times this season while ranking 86th nationally at 165.6 yards allowed per game.

“We’ve just been a little leaky as the season has gone on,” Dickert said. ”(But have) been able to make the big play to stop that momentum."

Arizona State leads the Pac-12 and is 22nd nationally in scoring defense, allowing 18.9 points per game. ... Washington State is second in the Pac-12 and No. 13 nationally with 15 takeaways. ... The Sun Devils lead the all-time series 27-15-2, but the Cougars have won two of the past three. ... Arizona State's offensive line has been good at protecting QB Jayden Daniels, allowing quarterback pressures on 22% of dropbacks this year.