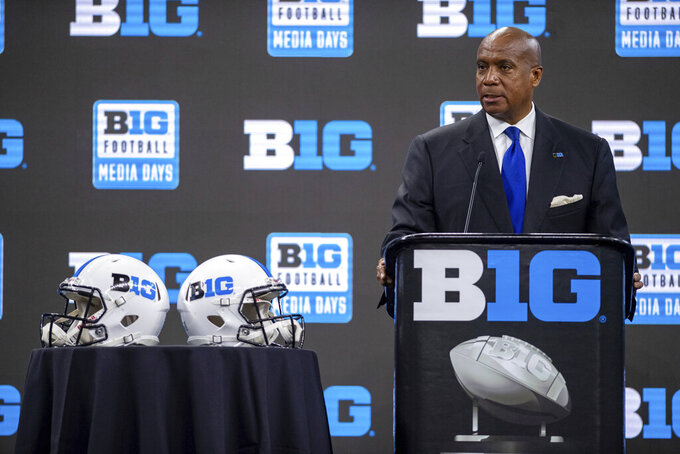 Big Ten Commissioner Kevin Warren said the conference will take take a “decentralized” approach to COVID-19 protocols by allowing each school to put in place its own plan.

“Our schools are finalizing their proposed policies and procedures for the fall,” Warren said at Big Ten football media days at Lucas Oil Stadium. “We’ll get that information in early August, we’ll combine it, and then we’ll get together with our chancellors and presidents and other key constituents to make the determination as far as how we handle the fall."

Warren also said there has been no determination on whether games would be forfeited — as has been suggested by the Southeastern Conference and Big 12 —- if teams cannot play because of COVID-19 issues.

Last season, the Big Ten at first called off its fall football season because of the pandemic before reversing course and deciding instead to start in late October.

The late start left no room for games to be made up and numerous Big Ten games were canceled because of COVID-19 left teams short players.

Offensive left tackle Thayer Munford and wide receivers Chris Olave and Garrett Wilson are cornerstones for a Buckeyes program that has won four consecutive conference titles and qualified for the College Football Playoff the past two years.

Each were 2020 first-team All-Big Ten selections.

Ibrahim rushed for 1,076 yards and 15 TDs on 201 carries as a junior. The scores rank fourth for a single season in school history.

Former Wisconsin athletic director and coach Barry Alvarez is joining the Big Ten as the special adviser for football.

Alvarez retired from Wisconsin after the past 18 years as AD and 16 seasons previously as coach of the Badgers. Big Ten Commissioner Kevin Warren announced Alvarez would be joining the conference, starting Aug. 2.

“I trust Barry Alvarez implicitly," Warren said. "He means everything to this conference.”

Alvarez will work with Warren on College Football Playoff expansion, television and bowl contracts, scheduling, and player health and safety.

Alvarez led the Badgers to three Big Ten titles and three Rose Bowl victories as a head coach and went 119-74-4.