Coach group wants ejection ruled out on some targeting hits 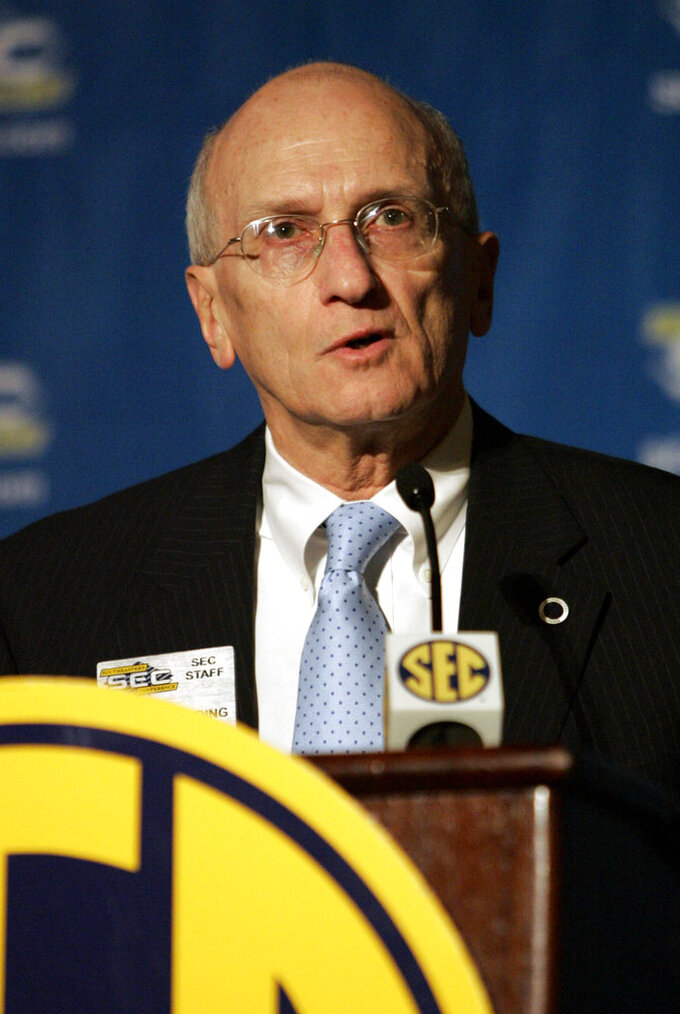 FILE - In this Thursday, July 24, 2008 file photo, SEC Officials Coordinator Rogers Redding speaks to the media about new rule changes at the SEC football media days in Hoover, Ala. The targeting rule could be changed in college football next season, eliminating the automatic ejection for some hits, if an American Football Coaches Association proposal is approved by the NCAA Football Rules Committee. Rogers Redding, the NCAA's national coordinator of officials, said that because the AFCA proposal concerns player safety, it would go into effect in 2019 if approved. Most other types of rules changes go into effect in even-numbered years under the NCAA two-year rules cycle. (AP Photo/Butch Dill, File)

Automatic ejections for targeting could be dropped in some cases as early as next season if an American Football Coaches Association proposal is approved by the NCAA Football Rules Committee.

Few rules have caused as much consternation, frustration and aggravation among coaches, players and fans as targeting, defined as forcible hits above the shoulders of players determined to be defenseless.

Coaches are unanimous in wanting to get punishing hits to the head out of the game, but they argue that ejection is too stiff a penalty for players who inadvertently strike an opponent above the shoulders.

The AFCA plans to submit the proposal for consideration when the rules committee meets in February, spokesman Vince Thompson said.

The targeting penalty was introduced in 2008 to reduce concussion risk and as a response to research showing severe head, neck, spine and brain injuries at all levels of football spiked in the 2000s.

Targeting initially was a personal foul, but the penalty has included automatic player ejections since 2013. Targeting calls are subject to video review and can be overturned.

Berry said a player who has multiple Targeting 2 penalties within a season could be more severely punished.

"All of our coaches are in favor of the targeting rule and they recognize the significance of it," Berry said. "We also recognize that there needs to be more clarification. There is going to be subjectivity in the enforcement of this rule, but this can be very costly to the student-athlete who has limited attempts to play this game. For a student-athlete to be ejected from a game for something that many would question to be the correct call can be severe."