Coach Orgeron: LSU receiver Marshall not yet ready to play 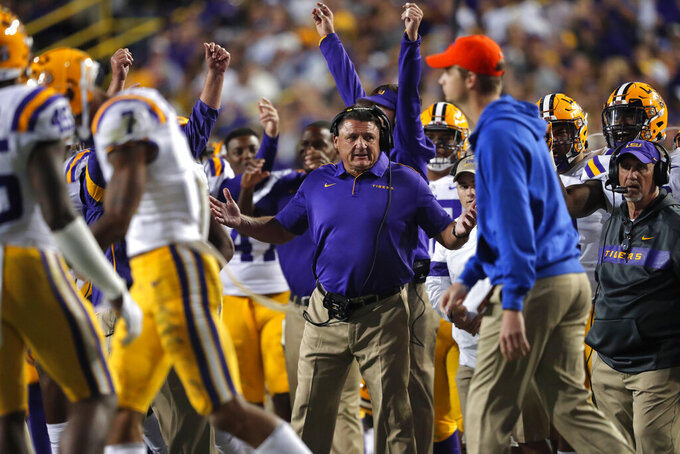 LSU head coach Ed Orgeron reacts on the bench on the sideline during the second half of the team's NCAA college football game against Florida in Baton Rouge, La., Saturday, Oct. 12, 2019. LSU won 42-28. (AP Photo/Gerald Herbert)

Marshall has missed two games since injuring his right foot during a victory at Vanderbilt on Sept. 21.

The sophomore caught 20 passes for 304 yards and six touchdowns before getting hurt. He was in uniform and participated in pre-game warm-ups last Saturday night before LSU's 42-28 win over Florida.

Orgeron says Marshall us "going to do some individual this week, but he's not ready to play yet."

Meanwhile, Orgeron says LSU is benefiting from the reintegration of guard Ed Ingram into the lineup. Ingram missed all of last season and the beginning of this season while sorting out legal matters stemming from an arrest on sexual assault charges.

Orgeron says Ingram has been subbing in and out during games because he's still "getting in playing shape."