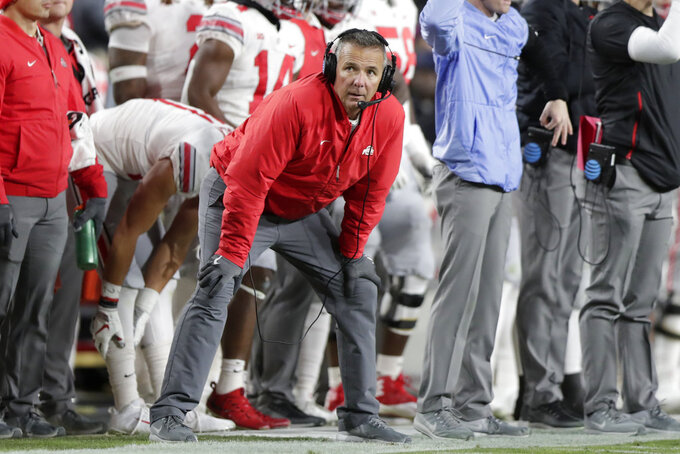 COLUMBUS, Ohio (AP) — Ohio State coach Urban Meyer addressed speculation that he could step down at the end of the season, saying Monday he felt fine and definitely would be back next year.

Meyer, who was suspended for three games to start the season and has been slowed by headaches caused by a cyst, has been the subject of talk around the college football world that he may retire after the season.

The chatter increased after he looked more distressed and beleaguered than usual on the sideline during the 49-20 loss to unranked Purdue on Oct. 20.

Asked to address the rumors at a news conference Monday, the 54-year-old Meyer said, "I plan on coaching." Asked if he would definitely return to Ohio State next year, he answered, "Yes."

Meyer, who is under contract through the 2021 season, missed training camp and the first three games this season over his handling of domestic abuse allegations against now-fired assistant Zach Smith.

Then, he was brought to his knees on the sideline with a headache during the Oct. 6 game against Indiana. He recovered quickly but said later that the cyst in his head has been causing headaches that are controlled with medication. He had minor surgery on it in 2014.

Meyer was told later in the news conference that people outside the program wanted to know how he was feeling mentally and physically.

"I appreciate it, and I'm fine," he said. "I want Ohio State to be successful in the worst way, (and I'm) working extremely hard to make sure that's happening. I love Ohio State, and I love our players. I don't want people to worry about me. I want to make sure we're getting some things right around here."

Part of that is trying to fix some of the problems that plagued the Buckeyes (7-1, 4-1 Big Ten) in the Purdue loss, particularly the inability to run the ball, and then score in the red zone.

The offensive unit worked exclusively on those issues during the bye week, Meyer said. The No. 8 Buckeyes play Nebraska at Ohio Stadium on Saturday.

"It's two things, in my mind," he said. "First of all, getting players in the right position, (and running backs) being more physical and breaking tackles."

The defense also has been an issue, and Meyer said that unit worked on tackling last week. The Buckeyes missed 20 tackles against Purdue.

"I think there's urgency," Meyer acknowledged. "I'm not saying it feels bad, but there's a tremendous amount of urgency. We understand November, we understand where we're at and what's at stake, and we understand our shortcomings."