Georgia done in by unusual rash of miscues in Sugar Bowl 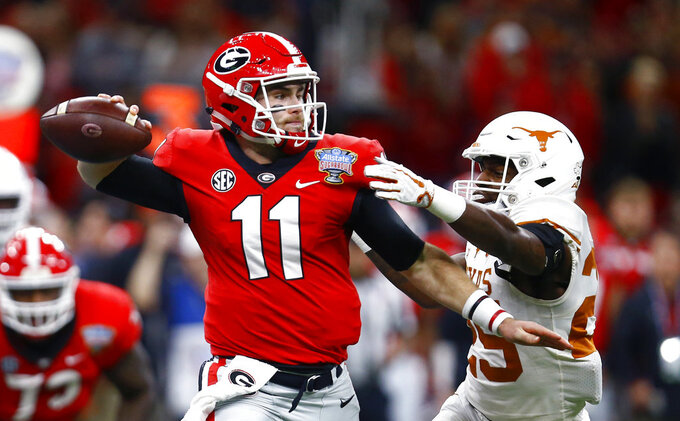 NEW ORLEANS (AP) — Fumbles and other failings put favored Georgia in a big hole in the Sugar Bowl.

A fumble by running back D'Andre Swift deep in Bulldogs territory and a botched punt attempt on a low snap led to 10 first-half points for a feisty Texas squad looking to make a statement that it was on its way back to elite status. Missed tackles helped the Longhorns sustain two other scoring drives, and that wasn't all that went wrong for No. 6 Georgia in a 28-21 loss on Tuesday night.

"Georgia didn't play our best game today and that's something we have to accept as a group and a ballclub," Georgia middle linebacker Natrez Patrick, a senior, said after what was his disappointing final game as a Bulldog. "It happens, man. It happens. Those guys came in a played a great game and we made mistakes."

Swift fumbled twice in the first half. The first gave No. 14 Texas the ball on the Bulldogs 12, leading to a touchdown. The second was recovered by Georgia on a drive that ended with a punt.

"I know DeAndre is as disappointed as anybody," Georgia coach Kirby Smart said. "We didn't play with the same energy level and that's a lot of credit to Texas because they were in our backfield several times. They penetrated, we weren't able to handle the penetration and that's how you cause fumbles."

The punt that never was — punter Jake Camarda's knee touched the turf as he scooped up a low snap — resulted in a turnover on downs at the Bulldogs' 27. That miscue led to a Texas field goal.

Texas quarterback Sam Ehlinger ducked under what looked like an impending blindside sack by outside linebacker Azeez Ojulari in the second quarter. Right after Ojulari slid over Ehlinger's back, the Texas QB rose out of his crouch and scrambled 17 yards for a first down to help sustain the Longhorns' second touchdown drive.

By halftime, Georgia was down 20-7, and it only got worse when the Bulldogs opened the third quarter with the ball.

Jake Fromm was intercepted on a downfield throw by P.J. Locke III on the Longhorns 17.

It was an uncharacteristic rash of untimely errors for Georgia, which less than a month ago went toe-to-toe with No. 1 Alabama in the Southeastern Conference title game.

"If you prepare right and you go out there and play your best football game, you don't have those errors," Smart said. "You've got to be able to overcome those sometimes. If you think about this year, we didn't have a start of a game similar to like that really all year. We've got to do a better job preparing our players for that and go out and execute."

The loss to the Crimson Tide ended Georgia's hope of qualifying for the College Football Playoff, so their invitation to the Sugar Bowl might have seemed more like focus-sapping relegation than a coveted bid to a big game in the Big Easy. And several Georgia players had manifested their bitterness over being left out of the national semifinals when they took to Twitter to mock Notre Dame and Oklahoma for their double-digit losses.

"Just because they tweet something emotional during that time, that doesn't matter," Smart contended. "It gives the other team motivation. But our team was motivated to play Texas. Texas outplayed us, outcompeted us. They outcoached us. They out-physicaled us. They did a lot of things better than us."

Whatever the case, Georgia was not at its best until it was too late, scoring its final touchdown in the final minutes. By then, Georgia was left needing to convert an onside kick just for a chance to tie the game. And like much of the night, the ball didn't bounce favorably for the Bulldogs on that play, either.

"I guess Texas treated this game bigger than we did maybe," Georgia receiver Mecole Hardman said.

By John Zenor 48 minutes ago
By Pete Iacobelli an hour ago
2 hrs ago
By Ralph D. Russo 5 hrs ago
By Ken Powtak 18 hrs ago