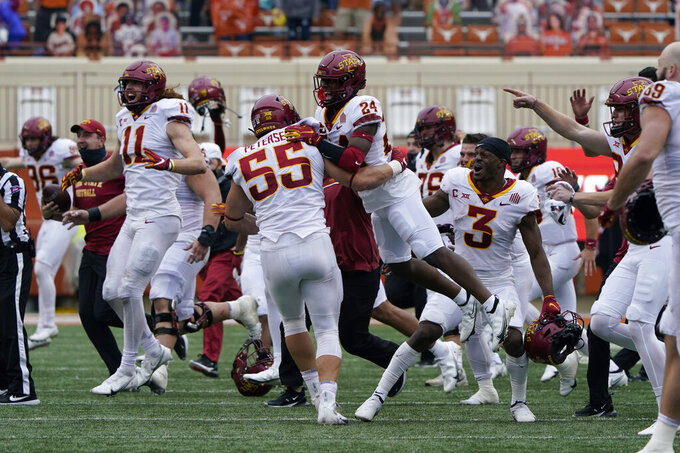 Iowa State players and coaches storm the field as they celebrate their win over Texas in an NCAA college football game, Friday, Nov. 27, 2020, in Austin, Texas. (AP Photo/Eric Gay)

Instead, the Cyclones looked like a program with championship DNA in the fourth quarter, despite not having won a conference title in more than 100 years.

Breece Hall scored on a 3-yard run with 1:25 remaining, and No. 15 Iowa State held off a last-minute drive by Sam Ehlinger and No. 20 Texas to remain in first place in the Big 12 with a 23-20 victory Friday.

“We don’t ever flinch,” Cyclones safety Greg Eisworth said. “That really is the truth.”

The Cyclones (7-2, 7-1) have almost locked up a spot in the Big 12 championship game for the first time with their second victory ever against Texas in Austin. Upstart Iowa State has beaten the blue blood Longhorns in consecutive seasons for the first time in 18 meetings.

“We always say it’s a five-star culture vs. five-star players,” Hall said. “We don’t always get the best players ... We want to be in games like this where it comes down to physicality and hard work. So today, us and our defense, just kept playing and we came out with a great result.”

Hall gained 91 yards on 20 carries, his first game under 100 this season, but had 30 on the final 69-yard touchdown drive. Quarterback Brock Purdy connected with tight ends Charlie Kolar and Dylan Soehner for the other 39 yards.

“When we needed to make plays, and that’s what really good teams do, we made them,” coach Matt Campbell said.

Iowa State trailed 20-16 early in the fourth quarter after a bad two-play sequence for Texas (5-3, 4-3) helped the Cyclones get a field goal by Connor Assalley.

First, the Longhorns came up 3 yards short throwing the ball on a fake punt on fourth-and-8. Then Purdy found Kolar for 44 yards. A holding penalty by the Cyclones forced them to settle for the Assalley's field goal to make it 20-16.

“The thinking on the fake punt was that we’d worked on it for two weeks and knew it was there,” Texas coach Tom Herman said. “They did a good job defending.”

Ehlinger was also were stopped inches short on a fourth-and-2 at the Iowa State 13 with 8:05 left in the fourth quarter when a field goal would have made it a seven-point game.

“The analytics said to go for it,” Herman said. “If you wind up converting and score a touchdown, you go up by 11. That’s two scores.”

Ehlinger was 17 of 29 for 298 yards and one touchdown in what could be his final home game for the Longhorns. Ehlinger and Brennan Eagles set up touchdowns in the first and third quarters, connecting for 59 and 45 yards.

“We still haven't played a great game where both sides of the ball were playing really well,” Ehlinger said. “That's frustrating. I'm confused. That much talent, we can't put it all together.”

Iowa State: The Cyclones have never won a championship in the Big 12 or their previous league, the Big Eight. Iowa State's last conference title came in 1912.

The Cyclones have not secured a spot in the Big 12 championship game, but a victory against West Virginia next week or another loss by Oklahoma State could seal it.

Iowa State, a perennial also ran for decades, might play for the title in Campbell's fifth season. “That’s why I came here," Purdy said. “Coach Campbell talked to me, what he envisioned this program to be, and I believed in it.”

Texas: The Longhorns have not been eliminated from the Big 12 race, but it's real close with two games to play. They have not won a Big 12 title since 2009. Herman was asked if he is the right man for the job. “That’s not for me to decide,” Herman said. “I feel like where we have the program right now, compared to where it was when we took over, the future is very bright.”

Said Ehlinger, “I don't think it's ever fully on the coaching. That's the million dollar question everybody's been trying to figure out for the last 10 years.”

Iowa State has a chance to move up after a nice win on the road.

Texas will fall, perhaps out of the top 25.

Texas faces Kansas State on the road on Dec. 5 and is goes to Kansas on Dec. 12.