Joey Bosa: Brother made right decision not to return to OSU 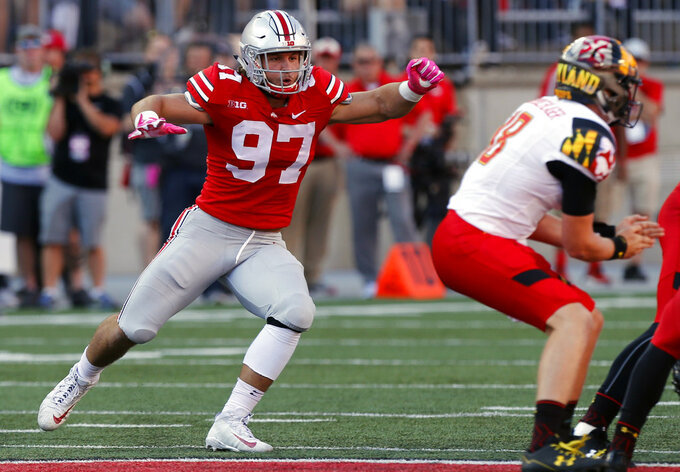 FILE - In this Oct. 7, 2017, file photo, Ohio State defensive end Nick Bosa rushes in against Maryland during an NCAA college football game Saturday, in Columbus, Ohio. Bosa’s college football career is over. The injured All-American defensive end intends to withdraw from Ohio State to spend time rehabilitating and training for an NFL career. He is expected to be a first-round draft pick. No. 2 Ohio State made the announcement on Tuesday, Oct. 16, 2018. (AP Photo/Jay LaPrete, File) 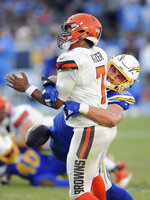 Nick Bosa suffered a core muscle injury on Sept. 15 against TCU. He had surgery five days later, and some had hoped the 6-foot-4, 263-pound junior could return late in the season. But Bosa announced on Oct. 16 that his Ohio State career was over.

Joey Bosa said the entire family discussed the matter and that they all came to the same agreement.

"You have to understand that it is a business and he has to take care of himself," Joey Bosa said Monday as the Chargers returned to practice following a bye week. "If anyone had the opportunity to hit the lottery tomorrow, would anyone risk that? He has that opportunity. There is a difference between high draft stock and No. 1 pick in the draft."

Nick Bosa earned All-America honors last season and is considered a possible top pick in next April's draft. Joey Bosa was the third overall pick by the Chargers in 2016.

Nick Bosa is currently rehabbing in Newport Beach and is staying with his brother. Joey Bosa said it has been nice having Nick around since they are both dealing with injuries. Joey has missed the Chargers' first seven games with a bone bruise in his left foot.

"He is bummed. We watched the game the other day (Ohio State's loss to Purdue) and he was not happy watching it," Joey Bosa said. "He wishes more than anything he could be there, but from a logical point of view it is the right decision."