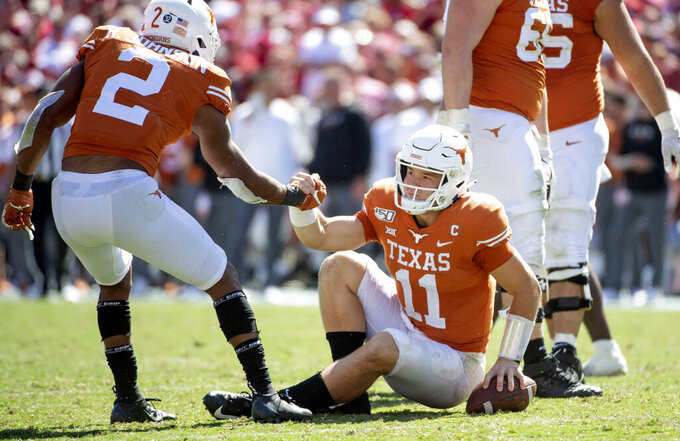 Texas quarterback Sam Ehlinger (11) is helped up by running back Roschon Johnson (2) after being sacked in the second half of an NCAA college football game against Oklahoma at the Cotton Bowl, Saturday, Oct. 12, 2019, in Dallas. Ehlinger was sacked 9 times as Oklahoma won 34-27. (AP Photo/Jeffrey McWhorter) 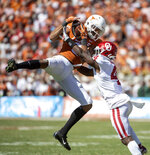 DALLAS (AP) — Jalen Hurts tried the Golden Hat on for size and gave a half-hearted "horns down" sign in a group photo with the cheerleaders while celebrating the way Kyler Murray couldn't in the Red River rivalry a year ago.

"I would say I didn't put the team in the greatest and best situation," said Hurts, who won two semifinals as the starter for the Crimson Tide and was replaced during the game when they won the national title during the 2017 season. "Not a complete game, but a step in the right direction."

And Oklahoma, with first-year defensive coordinator Alex Grinch, held the quarterback with the three highest total yardage outputs for Texas against the Sooners almost 200 yards below that 387-yard average.

"Regardless of what the outside world thinks, we believe a lot in our defense," coach Lincoln Riley said. "I don't care what our defensive calls our, schemes. Not that I don't care, but the way we play right now was the difference today."

The Sooners (6-0, 3-0 Big 12) stayed on track for a third straight trip to the playoff and avenged last year's loss in Cotton Bowl Stadium, which was followed by their victory in a rematch in the Big 12 championship game.

The Longhorns (4-2, 2-1) are likely relegated to a spoiler role if there's a second consecutive Big 12 title game between the rivals. Texas gave up 511 yards — a season low, believe it or not, for the nation's No. 1 offense at 644 yards coming in.

"We knew how good they were," Texas coach Tom Herman said. "We knew that their defense had improved, and we certainly saw the things that they were doing offensively."

Lamb had 10 catches for 171 yards, tip-toeing on the sideline to stay inbounds on the 27-yarder for his final TD.

Hurts threw for 235 yards, and the nation's leading rusher among QBs had 131 more on the ground, including a punctuating 3-yard touchdown for a 34-20 lead late in the fourth quarter. The 131 yards rushing were a stadium record for a QB and the most for an OU quarterback in the series.

Hurts had a chance to give the Sooners a big first-half lead, but he lost a fumble at the Texas 7-yard line at end of his longest run, a 27-yarder. The man with plenty of rivalry experience from facing Auburn threw an interception in the Texas end zone in the second quarter.

Ehlinger didn't look comfortable until well into the second half, flinching from a clean pocket and underthrowing a receiver that was behind the Oklahoma defense on the first play of the third quarter after the Longhorns were held to 83 yards before halftime.

The nine sacks left Ehlinger with 23 carries for those minus-9 yards, although he scored twice on the ground while going 26 of 38 for 210 yards. Roschon Johnson had 95 yards rushing, 57 of them on a third-quarter run that set up his 4-yard score.

"They did a really good job of swarming the football," Ehlinger said. "Obviously they recruit extremely well and have tremendously talented players. I feel like they just let them go make plays."

Oklahoma: Hurts made some poor decisions on throws, with one only costing the Sooners points. Another ill-advised throw into the Texas end zone was just out of the reach of a defender before a field goal for a 20-10 lead.

Texas: Even though the Longhorns got even in the third quarter, it never felt like they were in the game after the slow start offensively. The speed of Oklahoma's front seven seemed to have Ehlinger out of sorts most of the day.

The only ejection was Texas defensive lineman Malcolm Roach, and it wasn't for unsportsmanlike conduct. He was flagged for targeting while hitting Lamb helmet-first and late two plays before Lamb weaved through Texas defenders on a flea-flicker pass on a 51-yard score.

Riley was headed for the tunnel after the game when he turned around and sought out Grinch. It was a year ago after this game that Riley had to make the difficult decision to fire defensive coordinator Mike Stoops, brother of longtime coach Bob Stoops, whom Riley replaced.

"I was excited about how we played defensively," Riley said. "It was cool to be able to share that moment with him."

Leading Texas receiver Devin Duvernay had a quiet day (eight catches, 54 yards) — except for several questionable decisions on kickoff returns that hurt field position for Texas. One of them was ruled a fair catch at the 5 in the second half, followed by consecutive false-start penalties. Texas couldn't get a first down, and Oklahoma ended up with a field goal for a 10-point lead.

Texas: Kansas at home next Saturday.