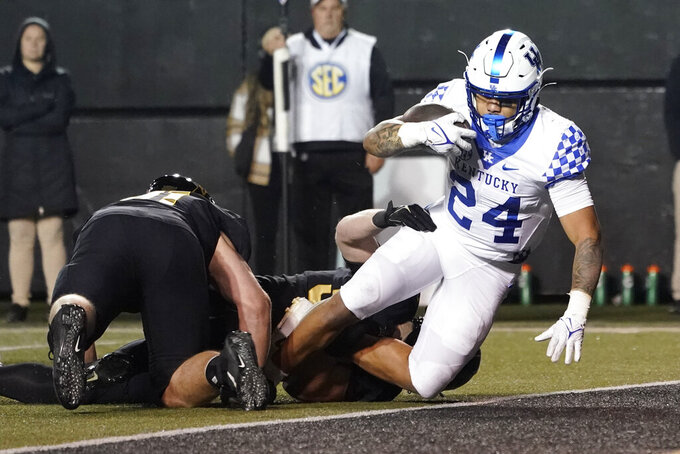 Kentucky running back Chris Rodriguez Jr. (24) scores a touchdown against Vanderbilt in the first half of an NCAA college football game Saturday, Nov. 13, 2021, in Nashville, Tenn. (AP Photo/Mark Humphrey)

NASHVILLE, Tenn. (AP) — Chris Rodriguez Jr. ran for 114 yards and a touchdown, Will Levis threw for two scores and Kentucky used a fast start to beat Vanderbilt 34-17 in a Southeastern Conference matchup on Saturday night.

The Wildcats (7-3, 5-3) ended a three-game losing streak and have won the last six games against Vanderbilt (2-8, 0-6). The Commodores have lost five in a row and 19 consecutive SEC games.

“We played more complimentary football in the first half than we have in some time,” Kentucky coach Mark Stoops said. “We did what we had to do to win. You know this was big for us coming on the road and getting another SEC East win.”

Levis hit Wan’Dale Robinson in the end zone for a 6-yard touchdown and Izayah Cummings for a 22-yard score. Jalen Geiger returned an interception 31 yards into the end zone. Rodriguez, who has rushed for over 100 yard five times this season, added a 5-yard touchdown run that stretched the Wildcats’ lead to 28-3 with 10:43 remaining in the second quarter.

Mike Wright took over for Vanderbilt starting quarterback Ken Seals to start the second half and threw an 8-yard touchdown pass Chris Pierce Jr. with 5:53 left in the third quarter. Wright later capped a 75-yard drive with an 8-yard TD pass to Amir Abdur-Rahman with 7:33 remaining.

“Ken was hurt in the first half,” Vanderbilt coach Clark Lea said. “We will have to see the extend of his injury. We were pleased with what Mike did in the second half. He knew during the first defensive series he was coming in. He was ready. I think he made good decisions. We have a lot to build on.”

The Wildcats offense was shut down for most of the second half. Matt Ruffolo’s 32-yard field goal with 13:26 left in the game broke the drought.

Kentucky: The Wildcats defense kept Vanderbilt’s offense in check. The Commodores did not reach the red zone in the first half and a 48-yard field goal by Joseph Bulovas was their only score. ... The Wildcats have held Vanderbilt to 22 points or less in seven of their last eight meetings.

Vanderbilt: Seals was back as the starting quarterback for the Commodores after missing the last three games with an injured finger. He completed 12 of 17 passes for 87 yards. He threw one interception, which was returned for a touchdown, and was sacked three times. ... Wright completed seven of 11 pass attempts for 58 yards, added 20 yards rushing and did not throw an interception.

Twelve Vanderbilt players were dealing with the flu this past week. “There is some toughness there we are proud of,” Lea said. “They battled through it.”

Vanderbilt: The Commodores are on the road for an SEC game against No. 12 Mississippi on Saturday.