Loss to Rutgers shows how far Michigan State has to go 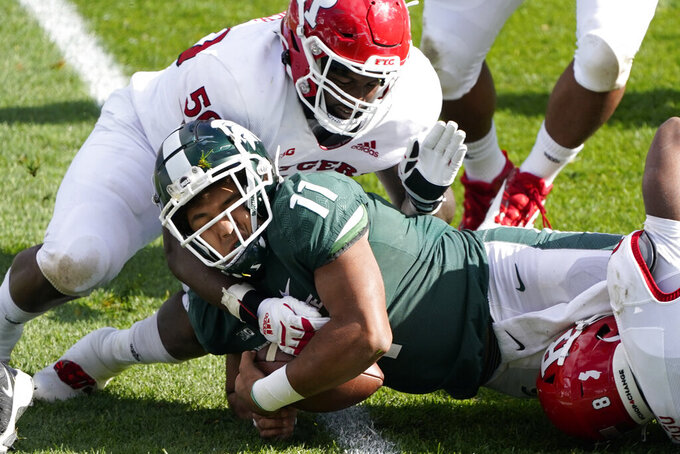 If anyone doubted the challenge facing new Michigan State coach Mel Tucker, it should be obvious now.

The Spartans began the season at home against Rutgers last weekend — perhaps the easiest game on their schedule, in theory — and lost 38-27. It was the first Big Ten win for the Scarlet Knights since 2017 and left Michigan State with basically no silver linings heading into its big rivalry game at Michigan this weekend.

“This is the beginning. It's not the end. So we're looking to make progress every day, and work really hard," said Tucker, who took over in February after Mark Dantonio's retirement. “You usually make quite a bit of improvement from the first game to the second game, and that's something that we're looking to do.”

Michigan State's news conferences Tuesday focused largely on the upcoming game against Michigan. In that sense, the Spartans are fortunate to have that matchup on deck — it allows them to move on quickly from the ugly loss. But Michigan State did not look in any way ready to face its biggest rival, and the Wolverines are favored by over three touchdowns.

Tucker seemed uninterested in calling Michigan by its name — instead using “the school down the road” — but if the Spartans are going to be competitive, they have a lot they need to fix.

Michigan State turned the ball over seven times in the opener. Some of those looked like the result of carelessness instead of Rutgers pressure — so the Spartans should be able to clean that up — but Michigan State looked a long way from being able to put together extended stretches of mistake-free football.

“I think there's a little bit of a mental side to it, with the new staff and the new offense, but ultimately, it just comes down to holding onto the ball," quarterback Rocky Lombardi said.

It was hard to evaluate Michigan State's defense at times, since Rutgers started with several short fields, and Lombardi did throw for 319 yards amid all those turnovers.

“I think we only punted twice,” Lombardi said.

A bigger concern was Michigan State's inability to establish a consistent running game despite plenty of attempts. A couple fourth-down runs were stopped short, and Jordan Simmons had the highest yards-per-carry average on the team at just 3.1.

That's not a good sign heading into the Michigan game. In that series, controlling the line of scrimmage is often crucial.

“One thing that's very important to be able to handle is, if in fact you do lose a game, how do you handle a loss?" Tucker said. "What is your mental disposition coming off of a game like that?”

Michigan, on the other hand, looked impressively sharp in its opener, a 49-24 win over a well regarded Minnesota team. Everything about last weekend suggested that Michigan was more ready to start the season than Michigan State — and that was no surprise, given the Spartans' recent coaching change and the unusual offseason that all teams had to deal with.

Michigan had little difficulty running the ball against Minnesota, and the question now is whether Michigan State can offer any more resistance.

“I don't want to spend too much time on last week, but I'll say one thing we can improve on is just third down,” Michigan State linebacker Antjuan Simmons said. "Getting off the field on third downs, that would help us a lot. ... As far as everything else, I'm not even thinking about Rutgers. It's all Michigan from here on out.”