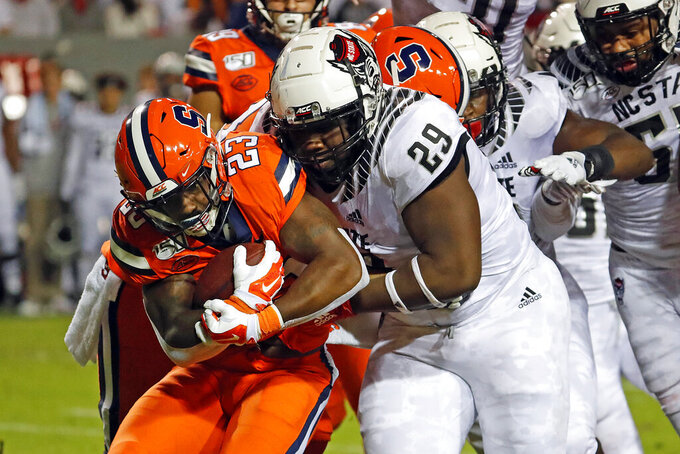 RALEIGH, N.C. (AP) — The sacks kept coming, one after another, for North Carolina State's defense all the way to the finish Thursday night.

The Wolfpack battered Tommy DeVito for eight sacks, the last coming from Larrell Murchison in the final seconds to seal a 16-10 win Thursday night.

The Wolfpack (4-2, 1-1 Atlantic Coast Conference) led all night and by as much as 16-0 in the third quarter before having to come up with a final stop to maintain its hold on the win. Fittingly, it came on the play that the Wolfpack made a habit in this one, with Murchison dragging down DeVito on a third down that left the Orange (3-3, 0-2) frantically trying to get another snap off against a dwindling clock with no timeouts.

Instead, they were flagged for a false-start penalty with 2 seconds left, prompting a clock runoff that ended it.

"I thought we showed a lot of stamina at the end, getting that sack to close out the game," Wolfpack coach Dave Doeren said. "The defensive staff I thought really put together a great gameplan and the kids executed it well."

Going back to an eight-sack effort in the last game against Florida State, N.C. State now has a program-record 16 sacks over consecutive games. That surpassed the previous mark of 14 against Virginia and North Carolina in 1982.

DeVito managed to stay upright to the end despite the constant pressure, connecting with Trishton Jackson for a 2-yard touchdown with 3 minutes left. Then the Orange forced an immediate three-and-out to get the ball back with the chance to win, though it ultimately only set up the Wolfpack's final stat-padding takedown.

"They were well-prepared after the break, and we've got to find a way to regroup," Syracuse coach Dino Babers said.

Syracuse: The Orange had at least regrouped from lopsided losses to Maryland and then-No. 1 Clemson with blowout wins against Western Michigan and Holy Cross, though they had been dealing with numerous injury concerns. That included DeVito, who left the last game early in the fourth with an upper-body injury — then took a beating in this one behind an offensive line that struggled to block anyone.

Asked about DeVito's potential limitations from injury, Babers said: "I saw a young man who was out there battling, trying to help us win."

N.C. State: The Wolfpack emerged from an open date with a new quarterback and plenty of practice reps to fix problems from the losses to West Virginia and Florida State. It was good enough on this night to win, and bring plenty of cover for the Wolfpack's offense that lacked any big-play potential under first-time starting quarterback Bailey Hockman.

Hockman replaced Matthew McKay as the starter for this one and completed just 16 of 27 passes for 205 yards with an interception on a screen pass.

"I've just got to get better," Hockman said. "That's the only thing on my mind right now, just keep working and keep getting better."

N.C. State's only touchdown came on a double-pass, with receiver Thayer Thomas connecting downfield with Trent Pennix for a 32-yard score shortly before halftime. Hockman's first two drives ended in field goals from Christopher Dunn, who added another kick in the third quarter for the Wolfpack's 16-0 lead.

DeVito and the passing attack had to carry the offense for Syracuse considering the Orange managed just 41 yards rushing on 37 attempts (1.1 per carry). That came against a defense that entered the night ranked sixth in the Bowl Subdivision ranks against the run at 71.8 yards per game.

The Wolfpack lost starting cornerback Chris Ingram to an apparent leg injury in the first half, joining a depleted secondary already without Nick McCloud and Taiyon Palmer.

Syracuse: The Orange host Pittsburgh in a cross-divisional league game next Friday.