NCAA offers guidance for bringing athletes back to campus 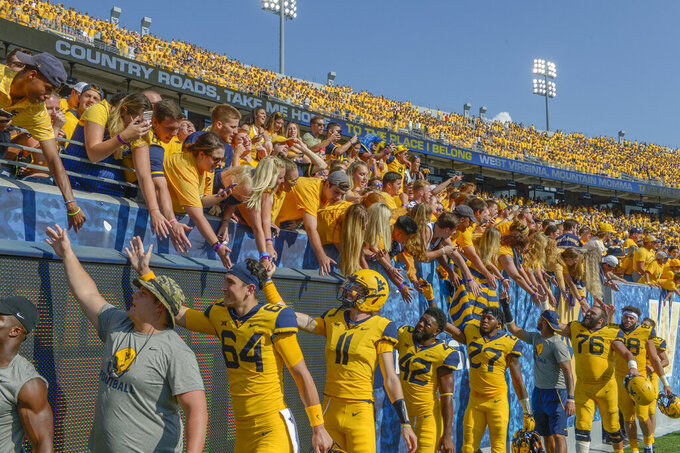 FILE - In this Oct. 6, 2018, file photo, West Virginia players high-five fans after defeating Kansas 38-22 in an NCAA college football game in Morgantown, W. Va. The crippling coronavirus pandemic has brought the entire world — including the sports world — to a standstill, and it shows no sign of going away anytime soon. That has left fans, stadium workers, team owners, sponsors and yes, even players, wondering what life will be like when games finally resume. (AP Photo/Craig Hudson, File)

The NCAA released a long and detailed plan Friday to help schools bring back athletes to campus during a pandemic.

While schools will need to have testing and surveillance plans in place, the guidance does not recommend testing all athletes upon arrival for COVID-19.

“There's not a universal, easy fit guidance like that,” said Dr. Brian Hainline, the chief medical officer for the NCAA. “Even when we speak with epidemiologist who are doing mathematical modeling and so forth, we just aren't there yet."

The Resocialization of Collegiate Sports: Action Plan Considerations was announced as schools across the country prepare for the return of football players as early as next week. Hainline said the latest guidance was a more granular follow-up to the three-phase recommendations handed down May 1.

The NCAA’s Division I Council voted last week to lift a moratorium on athletic activities starting Monday. That cleared the way for voluntary workouts and training to begin at team facilities.

Schools have already started putting plans in place to test athletes, coaches and staff for coronavirus and implement social distancing. The NCAA says its plan is offered as guidance, consistent with federal and local public health guidelines.

Shortly before the NCAA released its guidelines, the University of North Carolina posted on social media its plan to bring athletes back to campus.

North Carolina said it plans to test all returning football and basketball players and try to have players congregate in small groups.

"We will encourage all of the players to stay in their bubble and not be out with people that haven’t been tested, because it’s really important that we all go by this protocol,” North Carolina coach Mack Brown said.

Last week, Arkansas athletic director Hunter Yurachek said the school's first wave of returning athletes will go through "very robust” physical examinations and screening, but only those who are symptomatic will be given a coronavirus test.

Hainline said the NCAA’s COVID-19 Advisory Panel could not take a one-size fits all approach with its recommendations with more than 1,100 member all over the country.

“You always have to keep it broad so that the individual school can do what makes the most sense. Even schools within a conference may need to behave differently,” Hainline said. “Some schools are opening up at times that are different from other schools because states are opening up on different schedules.”

Hainline said simply testing is not enough and testing could lead to a false sense of security. An individual who tests negative for the virus upon arrival to campus could turn out to be infected and test positive later.

To effectively mitigate the spread of the virus testing needs to be combined with quarantine, social distancing, wearing masks and personal hygiene, Hainline said. All of those become especially challenging when managing teams in high-risk sports, such as football, basketball, hockey and soccer.

“If someone becomes positive the (answer) isn't necessarily that you then have to test all of the really high-risk contacts, because you can simply quarantine them all for two weeks and the problem is solved,” Hainline said. “So what we do is we set the standard of care. If there’s going to be another standard of care, then it would need to involve testing.”

Hainline said increased testing could be used to cut short the quarantine time of individuals that are considered high-risk exposures.

“So it's not just this simplistic diagram where you test or not test. It's a lot of things we have to consider," Hainline said.

Hainline said one of the next steps for the NCAA is to come up with guidance for conducting practices and games with social-distancing and other mitigation measures in places.

Hainline said he was on a call Friday with members of the NCAA Football Oversight Committee, discussing possibilities such as who should be obligated to wear a mask and how to keep players in relatively small groups.

“All of these logistics are important to try to solve,” Hainline said. “So working with the American Football Coaches Association, Todd Berry, the CEO, and other football coaches, this is going to be a very active discussion.”

The college football season is scheduled to start around Labor Day weekend, with a few games being played the Saturday before the holiday weekend. There is to be a full slate of games from Sept. 3-7.