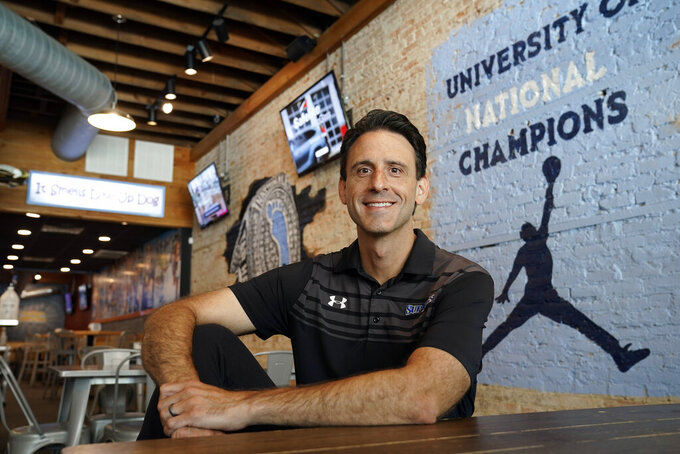 Bret Oliverio poses at his Sup Dogs restaurant in Chapel Hill, N.C., Thursday, July 15, 2021. Oliverio wants to pursue deals with college athletes to endorse his restaurant specializing in hot dogs and burgers along the main Franklin Street drag steps from the University of North Carolina. Like other small-business owners in college towns, he has to sort out what that entails with athletes free to profit from use of their name, image and likeness (NIL) for the first time. (AP Photo/Gerry Broome)

He is just being patient before jumping into a brave new world.

Like other small business owners in college towns, Oliverio is sorting out just what it means to strike an endorsement deal with athletes who are now free to profit from the use of their name, image and likeness (NIL) for the first time.

The NCAA's decision to allow athletes to cash in arrived July 1 with a few restrictions and even less guidance. There is no “pay for play” allowed but many rulebook no-nos that once led to ineligibility are now largely fair game, provided the athlete provides some type of service — a social media shoutout, an appearance, a signature — in exchange for compensation.

Schools are cobbling together policies or leaning on state laws permitting NIL activities, along with having compliance staffers scrambling to ensure athletes follow guidelines.

“I would say it’s a beautiful mess,” said Kurt Svoboda, an associate athletic director at Michigan. “It truly is. These are uncharted waters.”

It certainly is for schools and for businesses assessing a market that is less than a month old.

How much is it worth to have an athlete endorse the local pizzeria on social media? What about appearances at a car dealership or tattoo parlor – popular subjects of past NCAA infractions investigations – for a fee? How much will those moves boost the bottom line, if at all?

That uncertainty explains why Aaron Nelson, president and chief executive of The Chamber For a Greater Chapel Hill-Carrboro, said business owners near UNC are “looking to learn more before they go fullcourt press on it.” They aren't alone.

At Lucky 13 Tattoos on Broad Street in Richmond, Virginia, just a short walk from where Virginia Commonwealth play its home basketball games, a framed Milwaukee Bucks jersey of former VCU star Larry Sanders hangs on the wall. Manager Bob Knox said it was a gift from Sanders, who had several tattoos done at the shop and still drops by.

Knox said his staff has put ink on a lot of VCU and Richmond athletes over the years, but he wasn't sure about the value of striking deals with college athletes from a marketing point of view — even a popular one.

“Tattooing is different than a lot of other businesses. Tattooing is all word of mouth,” Knox said. “You don’t go where you’ve heard about, you go where your buddy went."

On the table for athletes, of course, are deals with auto dealerships and tattoo shops, an ironic twist given some of the past infractions scandals. For his part, Knox said he was unfamiliar with the so-called “tattoo five” from Ohio State, who traded memorabilia in exchange for tattoos. Former Buckeyes quarterback Terrelle Pryor, like former USC star Reggie Bush, have suggested past rules violations should be wiped clean now that things have changed.

A number of companies have emerged the past few years with an eye on connecting college athletes to business deals, and they have been busy the past few months. To Athliance CEO Peter Schoenthal, whose company designed “disclosure and education” software helping schools review and athletes close NIL deals, the right time is now.

“If I’m a local business, it’s probably cheaper for me to partner with these student-athletes and use their social-media engagement to drive traffic to my business rather than put up a billboard pay for radio, do Google AdWords," he said. “This is actually not only a more fun way to advertise, because you get to the be first ones in NIL, but also a cheaper and more effective way."

Others moves have been smaller, with a clever charm.

Jordan Wright, owner of Wright’s Barbecue near the Arkansas campus in Fayetteville, reached deals with members of the Razorbacks offensive line as “Protectors of the Pit.” A few days later, the Wisconsin offensive line struck a similar BBQ deal of their own.

Wright started with restaurant gift cards as well as merchandise for compensation. He wants to work with as many Razorbacks athletes as possible, though he has expanded to a deal with UCF linebacker Quade Mosier, whose hometown is Fayetteville.

“I’m a local guy, I’m a barbecue dude,” Wright said. “I’m just a guy that’s got a family who has a cool barbecue place who likes to do cool things. … I think it is good for the brand.”

At the Parker Chrysler Dodge Jeep Ram dealership near Mississippi State’s Starkville campus, general manager Kristi Snyder was mulling money, merchandise or even vehicle servicing as compensation. She said she was planning meetings with Bulldogs athletes and is eager to align with the newly crowned NCAA champion baseball team while “spreading the love” among multiple sports.

She said she wants to know what the athletes are expecting from her — and how much time they will have to do the work.

“I’m really just more curious: What can you do for me?" she said. "Because at the end of the day, I’m looking for a return on an investment as well, right? I want it to be a really good mutual agreement with a student who could represent us well on this smaller stage.”

In Michigan, Ann Arbor-based company Underground Printing sells apparel and other products online through its 25 stores from Chapel Hill to Norman, Oklahoma. Owner Rishi Narayan said it is a natural avenue for athlete entrepreneurs but he is taking a wait-and-see approach: “We’re unsure what the market is or what’s the right way to do things.”

Nearby, general manager Phil Clark of Ray’s Red Hots — which sells Chicago-style hot dogs near the Michigan campus – described “very exploratory” conversations when it comes to NIL, including potentially signing an entire Wolverines women’s team to a deal.

“It’s sort of the wild West out here,” Clark said. “I’ve heard tale of people pursuing all kinds of deals from money payouts to free food for life.”

Back in North Carolina, Oliverio is closely watching NIL developments with an eye on his two college-town restaurants (the other is in Greenville, near East Carolina University).

The right opportunities will come in time, he figures.

“I think it’s great for the student-athlete – it’s about time they make some money,” he said. “I think it’s awesome for small businesses like ours because we have a huge advertising channel that just opened up that has never been there. So just like anything else, it’s all about finding the right value.”

This story has been corrected to describe Athliance as operating “disclosure and education” software instead of marketing software.