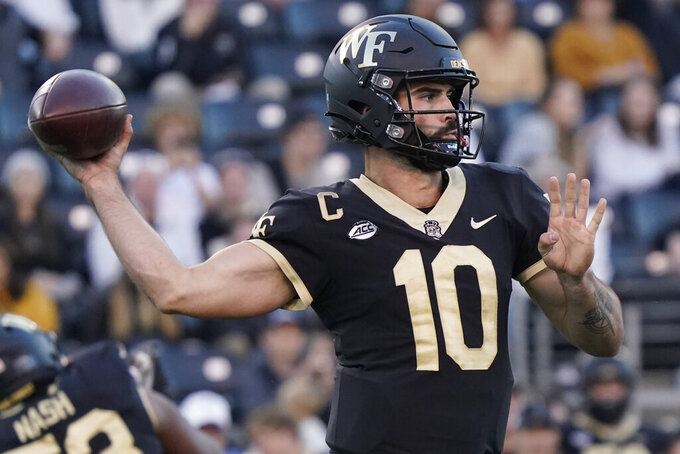 Line: Wake Forest by 3 1/2 according to FanDuel.com Sportsbook.

Wake Forest seeks its fourth consecutive victory in an effort to stay in Atlantic Division contention. Louisville looks to continue its first winning streak this season by reaching .500 in ACC play and edging closer to bowl eligibility. They also aim to avenge last year’s 37-34 loss decided on a last-minute field goal.

Wake Forest quarterback Sam Hartman vs. Louisville’s pass defense. Hartman pilots the nation’s 10th-ranked scoring offense (41.4 points per game) and ranks fifth in FBS with 21 touchdown passes despite missing the opener. He’s also the ACC’s No. 2 passer with nearly 293 yards per outing. He faces a Louisville pass rush that leads the ACC with 25 sacks and a secondary that has intercepted at least two passes in three of the past four games. The Cardinals rank just behind leader North Carolina State with 10 pickoffs.

Wake Forest: WR Jahmal Banks is the program’s latest success story in a long run of developing receivers for prime roles. The third-year player is tied for eighth in FBS with seven touchdown grabs, including two in last weekend’s win against Boston College. That marked his third two-TD game this season.

Louisville: LB Yasir Abdullah came up big against Pitt with two turnovers, including forcing the critical fumble on his sack that Kei’Trel Clark returned for a late touchdown. He also intercepted a pass, broke up two attempts and made two tackles for loss among seven stops. His 36.5 TFL are fourth all time.

Wake Forest has won 12 consecutive games in October. ... The Demon Deacons are plus-7 in turnover margin, third in the ACC. ... Wake has won three of the past five in the series but is 1-3 in Louisville, earning that win in 2018. ... The Cardinals rank second in the ACC and ninth nationally with 16 takeaways. ... Marshon Ford had a touchdown catch and is second all-time among Louisville tight ends with 17. ... Louisville is 1-6 against ranked teams and 0-3 against Top-10 teams under Scott Satterfield.