No. 11 Irish prepare for night visit from North Carolina 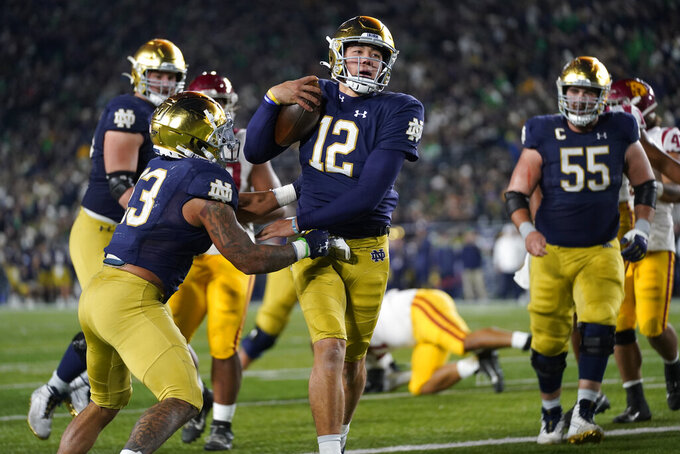 Line: Notre Dame by 3 1/2, according to FanDuel Sportsbook.

Notre Dame has a slim chance to make the College Football Playoff but will need plenty of help. Realistically, the Irish need to win out for a New Year’s Six bowl berth. The Tar Heels, whose preseason No. 10 ranking was one spot behind the Irish, have struggled with three ACC losses. They are coming off a bye week following a 45-42 home victory over Miami.

Notre Dame’s defense vs. a North Carolina offense that is averaging 36.9 points per game (18th nationally) and 471.1 yards in total offense (15th). The Irish will have to do it without junior All-America free safety Kyle Hamilton, who has three of the team’s 11 interceptions (fifth nationally) but was listed out for the game Monday by coach Brian Kelly after suffering a knee injury last week against Southern California.

North Carolina: QB Sam Howell. The junior has completed 61.1% of his passes for 1,851 yards and 18 touchdowns with just six interceptions. Howell also has rushed for 493 yards (5.1 per carry) and five touchdowns. He’s only the fourth QB in FBS history to have back-to-back games (victories over Georgia State and Virginia) of 300-plus passing yards and 100-plus rushing yards.

Notre Dame: DE Isaiah Foskey. The 6-foot-5, 260-pound junior has 12.5 career sacks, including one in last season’s 31-17 victory at North Carolina. Foskey has eight sacks this season (third in the nation), the most since Jerry Tillery and Julian Okwara had eight in 2018. Justin Tuck holds the school record with 13.5 sacks in 2003.

The series began Nov. 12, 1949 at Yankee Stadium with a 42-6 Notre Dame victory by Frank Leahy’s eventual national champions. … Tar Heels’ only two victories came in Chapel Hill: 12-7 in 1960 and 29-24 in 2008. … Kelly is 3-0 against North Carolina since arriving at Notre Dame in 2010. … Kelly considers Mack Brown a mentor: When Kelly was at Grand Valley State, he often spent time observing Brown’s teams at Texas, where he won a national title in 2005. … After a 31-16 victory over USC, the Irish have won nine straight night games at Notre Dame Stadium and have won 37 consecutive games against non-ranked opponents.