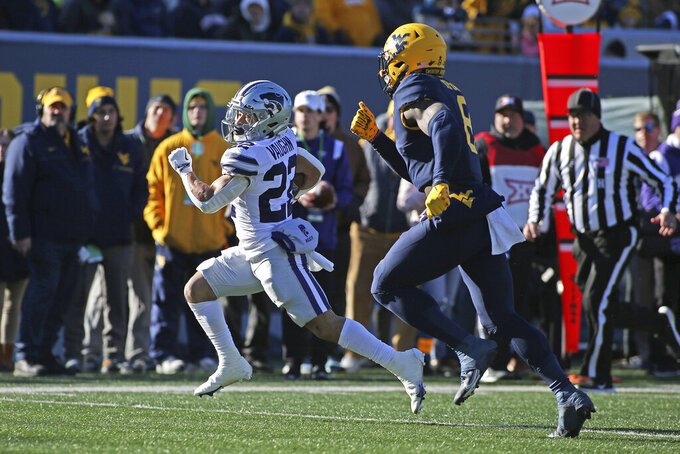 Kansas State could have to beat the Jayhawks for the 14th consecutive time to earn a spot against TCU in the Big 12 championship game. But the Wildcats also could have the spot wrapped up if Baylor can beat Texas on Friday. As for the Jayhawks, they can improve their bowl position with their first win over their rival since Nov. 11, 2008.

Kansas State RB Deuce Vaughn against the Kansas run defense. Vaughn is the Big 12's fourth-leading rusher with 1,148 yards and six scores while catching 38 passes for 266 yards and three more touchdowns. He ran for 162 yards and three scores in the Wildcats' 35-10 win over the Jayhawks last season. Kansas allowed Texas star Bijan Robinson to run for 243 yards and four scores last week, and the Longhorns piled up 427 yards and six TDs as a team.

Kansas QB Jalon Daniels struggled last week in his return from a shoulder injury that kept him out for six weeks. He was 17 of 26 for 230 yards with two TD passes and a pick against Texas, and he had two carries for 12 yards in the 55-14 loss.

Kansas State DE Brendan Mott had a team-high eight tackles along with three sacks last week against West Virginia, earning him the Big 12's defensive player of the week honors. Mott has six sacks on the season.

Kansas and Kansas State have not met on the final weekend of the regular season since 2016. ... Kansas has lost five of its last six games. ... The Jayhawks have not won in Manhattan since 2007. ... Kansas is averaging 7.20 yards per play this season, tied for third nationally with Tennessee and behind only Ohio State and Southern California. ... Kansas RB Devin Neal is averaging 6.46 yards per carry. He has eight runs of at least 30 yards this season. ... The Jayhawks are fifth nationally in passing efficiency and sixth in fewest sacks allowed. ... The Jayhawks allowed 539 yards total offense last week against Texas. ... All of Kansas State's losses this season are to teams that are currently ranked. ... Wildcats coach Chris Klieman won his 100th game last week against the Mountaineers. He has 32 losses for a winning percentage of 75.8.