No. 15 Washington travels to UCLA for key Pac-12 matchup 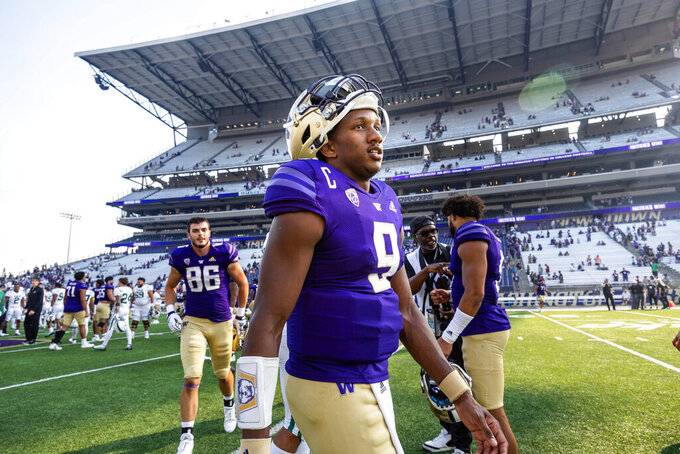 LOS ANGELES (AP) — No. 15 Washington and UCLA are both unbeaten and have many questions to answer going into Friday night’s matchup at the Rose Bowl.

The Huskies — under first-year coach Kalen DeBoer — have won their first four games for the first time since 2017 but are playing their first road contest of the season.

The Bruins have won seven straight dating back to last season but played the softest opening stretch by a Power Five program over the first month of this season.

“It’s gonna be fun. I say it every week, we’re going to see if they can run with us and compete with us. We’re just gonna go in and do our game,” UCLA quarterback Dorian Thompson-Robinson said.

Both teams have started 4-0 in the same season for the first time since 2014. They also won their conference openers last Saturday.

The quarterbacks will be at the forefront. Washington’s Michael Penix Jr. leads the nation in passing yards and is the only QB to have four 300-yard games this season. Penix, who transferred from Indiana, also leads the Pac-12 with 12 passing touchdowns.

DeBoer was Penix’s quarterback coach and offensive coordinator at Indiana in 2019 before he took the head coach job at Fresno State for two seasons.

“When you have confidence in those people surrounding you, and you can just do your job, and when you’re as talented as he is, you just play free, and you cut it loose,” DeBoer said. “Right now, we’re riding the momentum of all that. It’s cool. Even if it goes against you for a short time and some adversity hits, I feel like Mike understands that it’s just temporary. And we preach that to the team. He’ll get us back on track.”

Thompson-Robinson leads the conference with a 74.8% completion rate and has the most rushing yards by a quarterback with 170.

The next three games will determine whether UCLA can be a contender for the Pac-12 title. After facing the Huskies, the Bruins host defending conference champion Utah on Oct. 8 before going to Oregon on Oct. 22.

UCLA edge rusher Laiatu Latu leads the Pac-12 in sacks with five and is coming off a career-high three-sack game Saturday at Colorado. The junior transferred from Washington this year after not being medically cleared to play last year. Latu suffered a neck injury during practice in 2020.

Latu and the Bruins defense will try to do something that hasn’t be done yet this year — sack Penix.

“Yeah, that’s the big matchup. It’s a really good scheme. I think from a defensive perspective is our ability to disrupt their passing game and keep them off track, so that’s going to be the challenge,” UCLA coach Chip Kelly said.

Washington always felt it had a deep, talented group of wide receivers, and the first four weeks have only reinforced that belief. Washington has seen four different receivers top 100 yards receiving in just the past three games.

Jalen McMillan and Giles Jackson both topped 100 yards in the win over Portland State. Ja’Lynn Polk had a career-high 153 yards and three touchdowns in the win over Michigan State. And last week, Rome Odunze went for 161 yards and one touchdown against Stanford. It’s the first time since 2011 that four different Washington pass catchers have had 100-yard games in the same season and just the second time in school history that it has been accomplished in a three-game span. The previous came in 2001.

Washington’s pass rush was unleashed last week against Stanford with eight sacks. It was tied for the second-most by any team in the country this season and was the most by Washington since also having eight sacks in a win over Cal in 2017. Bralen Trice and Alphonzo Tuputala led the way with two sacks each, but several other Huskies got in on the action. That was against Stanford and a traditional drop-back passing game. The Huskies may find it more difficult facing the mobile Thompson-Robinson.

The junior is fifth in the Pac-12 with 293 rushing yards, and the Bruins are 9-0 over the past two seasons when the junior has at least 100 yards.