No. 16 SMU looks to stay undefeated at Houston 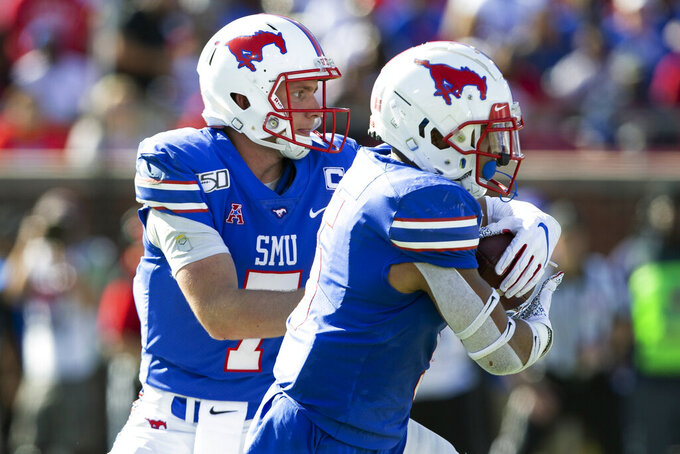 SMU quarterback Shane Buechele (7) hands the ball off to running back Xavier Jones (5) during the second quarter of an NCAA college football game against Temple in Dallas, Saturday, Oct. 19, 2019. (AP Photo/Sam Hodde)

SMU looks to extend its best start since the Pony Express days in 1982, before the NCAA death penalty. The Mustangs are currently the highest-ranked Group of Five team, which would put them on track for a Cotton Bowl berth if they could stay that way. Houston is 2-1 since standout dual-threat quarterback D'Eriq King decided after the fourth game that he was redshirting the remainder of this season to save a year of eligibility.

SMU passing game against Houston defense. Mustangs quarterback Shane Buechele is coming off a career-high 457 yards passing with six touchdowns, with Reggie Roberson Jr. was on the receiving end of 250 yards and three touchdowns. The Cougars have had a hard time defending the pass. They are last in the American Athletic Conference, allowing 299.9 yards passing per game.

SMU: Senior WR James Proche had a touchdown catch last week, giving him 32 for his career and within two of Emmanuel Sanders for the most in school history. He has 54 catches for 609 yards and eight TDs this season.

Houston: Junior nickel back Grant Stuard, who entered this season with 32 career tackles, is second in the American with nine tackles per game and his 44 solo tackles lead the league.

SMU has gotten off to quick starts this season, outscoring teams 79-20 in the first quarter while outgaining them 1,033 total yards to 394 in the same span. ... Houston is 5-2 at home against Top 25 teams since starting play in their current stadium in 2014. ... With another Thursday night game, along with a Friday and a Sunday game, only half of Houston's first eight games have been on a Saturday. ... The Mustangs have 22 rushing touchdowns, already five more than all of last season.