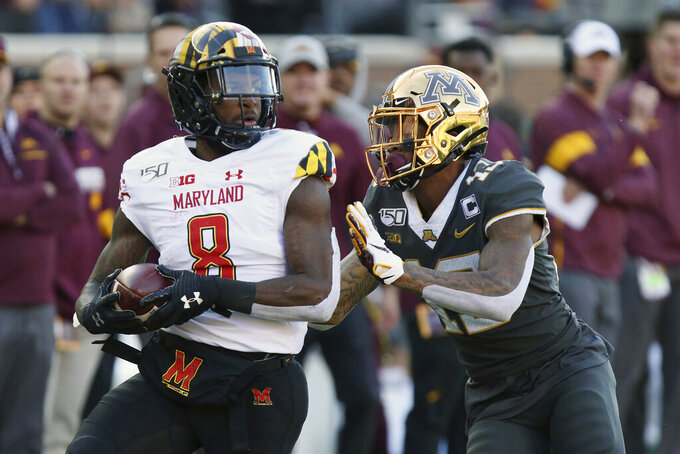 MINNEAPOLIS (AP) — Coach P.J. Fleck had finished celebrating No. 17 Minnesota's 52-10 victory over Maryland on Saturday and again echoed the familiar refrain to reporters that his Gophers concentrate only a week at a time.

With the game behind him, and a potential matchup of undefeated Top 25 teams on the horizon, Fleck willingly went into pitch mode for ESPN's "College Game Day" to come to Minnesota on Nov. 9 when the Gophers host Penn State.

"I'm really lobbying here," Fleck joked, recalling a conversation with Game Day host Rece Davis. "Well, Rece, we're here. It's a perfect opportunity to do it, and it's unique and creative. It's not the same old, same old. No offense to Alabama and LSU, that's pretty cool. But this, I think, is a unique experience that doesn't happen very often, and hasn't happened ever."

Rodney Smith ran for 103 yards to become Minnesota's career leader in all-purpose yards, Seth Green had two touchdown runs and the Gophers routed Maryland to set up the intriguing matchup in two weeks.

"Trap games, you want to look ahead, this team does not look ahead," Fleck said. "Whether we would have lost or won tonight, they don't look ahead. They're not allowed to, our culture's very strong, the four walls are really tight and found a way to get a win."

Maryland (3-5, 1-4) lost for the fifth time in six games while again losing a starting quarterback. Tyrrell Pigrome was injured late in the first half. He was helped off the field favoring his left leg.

"They're a team that possesses the ball, and they control the tempo," Terrapins coach Michael Locksley said. "It was going to be up to us to get off the field on defense, which we didn't do. We gave up 300 yards rushing. That tells the story for us."

Javon Leake had a team-high 44 rushing yards and Maryland was held to 79 yards rushing as a team. Anthony McFarland Jr. returned after missing a game with an ankle injury and had 38 yards on 10 carries.

In wins over Minnesota the past two seasons, the Terrapins had a combined 577 yards rushing.

"We tried to get things going coming out," McFarland said. "We just didn't execute. That's all it is with us. A lot of times when we get down like this and take these tough losses, it's always because we beat ourselves."

On the second play from scrimmage, Pigrome's pass to Dontay Demus Jr. was tipped and intercepted by Antoine Winfield Jr. Morgan capped the ensuing drive with a touchdown pass to Rashod Bateman.

Coney Durr later intercepted Pigrome's pass, on another tip by Demus, and returned it 72 yards for a touchdown.

FROM TWO TO ONE

Pigrome started his third straight game at quarterback, but Maryland also had Josh Jackson in uniform after he missed the previous two games with a sprained ankle. Jackson, who started the first five games of the season, played one series in the first half.

Pigrome was replaced by redshirt freshman Tyler DeSue. DeSue was 4 of 12 for 88 yards passing and he connected with Tayon Fleet-Davis for a 59-yard touchdown. Locksley didn't have an update on Pigrome after the game and said he felt Jackson wasn't ready to play full-time.

In his 47th game for Minnesota, Smith surpassed Darrell Thompson for the school's all-purpose yards mark with 5,117. Thompson had 5,109 yards in 45 games.

Smith moved to third in rushing yards with 3,848, a chart led by Thompson at 4,654. Smith is 85 yards behind Laurence Maroney for second.

"I think team goals always come before personal goals," Smith said. "We know we're a special group. We just have to keep the train rolling."

Maryland: For the second time this season against a ranked opponent, Maryland's running game was shut down. The Terrapins entered the game third in the Big Ten in rushing averaging 207.1 yards per game. The road ahead isn't any easier with two more ranked opponents the next two weeks.

Minnesota: The Gophers have taken care of their schedule to date. Now comes the challenge with home games against the Nittany Lions and No. 13 Wisconsin and road games at No. 20 Iowa and Northwestern in the season's final month. Minnesota has a two-game lead in the Big Ten's West division and likely would appear in the conference championship game with a victory against the winner of next week's Iowa at Wisconsin game.

Another small move up the poll is likely, particularly with No. 13 Wisconsin losing its second straight game and No. 15 Texas losing at TCU. The Gophers last ranking as high as this season was in 2004 when they reached No. 13.