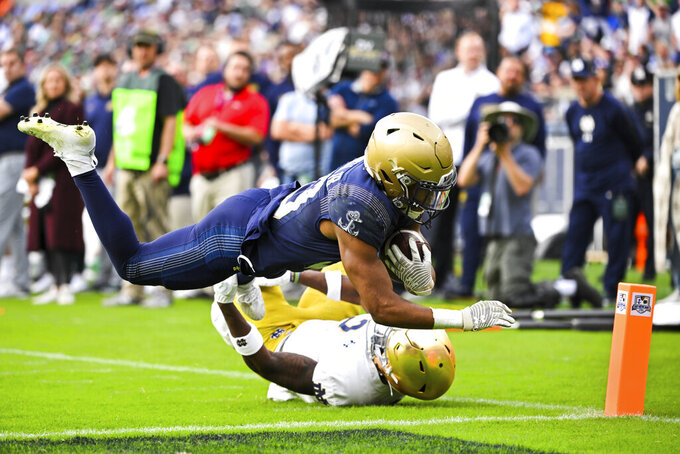 ORLANDO. Fla. (AP) — The No. 17 Central Florida Knights have recovered from last month's surprising loss at East Carolina and find themselves controlling their own destiny when it comes to hosting the American Athletic Conference championship game in two weeks.

The next step is beating Navy at home on Saturday.

“This is obviously a very, very important game,” UCF coach Gus Malzahn said. “Tough, tough, task. You’re talking about a team that had a chance to beat Notre Dame last week. They got after them really good in the second half. It went down to the very end. We know we’re going to get their best.”

UCF (8-2, 5-1), meanwhile, won its third straight by beating then-No. 16 Tulane 38-31 on the road. Quarterback John Rhys Plumlee returned from a concussion sustained last month against Cincinnati and accountd for 308 yards of total offense and three touchdowns.

The latest victory came after the Knights beat Cincinnati and Memphis to rebound from a 21-point loss to East Carolina that momentarily put a dent in UCF’s conference title aspirations.

“I think we learned a good lesson at East Carolina,” Malzahn said. "We’ve been completely different since then. We’ve got a veteran team, mature team. We’ve got really strong leaders. We just prepared a little bit different, there’s no doubt with that.”

The Knights are also in good position to be the highest-ranked, non-Power 5 conference champion if they win out, which carries a guaranteed New Year’s Day 6 bowl game.

“It is in our grasp,” Knights wide receiver Ryan O’Keefe said. “We’re just going to focus and take it one game at a time.”

Navy beat UCF 34-30 last season and should have momentum following the dominating second-half performance against Notre Dame. The Midshipmen also dropped a 20-10 decision to Cincinnati on Nov. 5.

“It’s going to be a tough challenge, but it would be awesome for us" to win, Navy coach Ken Niumatalolo said.

When asked if the 11 a.m. EST kickoff could help Navy because of its normal early schedule, Niumatalolo said he hopes so.

UCF has a plan in place based on a game at Temple last season.

“We got our guys up earlier, turned some music on and got our blood pumping,” Malzahn said. “Hey, we could play out in the darn Wal-Mart parking lot at 7 a.m. That’s just the way it goes.”

Navy: QB Xavier Arline left with what appeared to be a leg injury in the Notre Dame game.

“We feel good about X,” Niumatalolo said. “I think he’s on track, so we’re excited about that.”

UCF: DB Quadric Bullard is out for the season with a knee injury.

“He was an impact player on defense, special teams, punt block and all that,” Malzahn said. “That’s a big blow. There’s no doubt.”