No. 23 SDSU looks to stay on track for MWC championship game 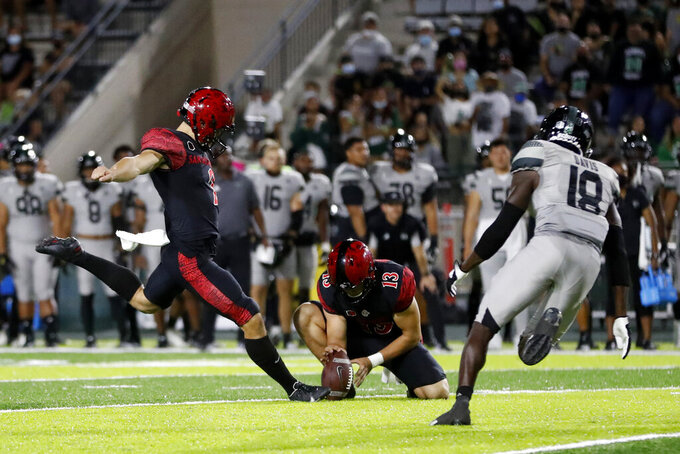 Line: SDSU by 10 1/2, according to FanDuel Sportsbook.

San Diego State looks to keep the inside track for the West Division championship and a spot in the MWC championship game. The Aztecs are 5-1 atop the West, ahead of Fresno State at 5-2, with two games remaining. After playing the Rebels, SDSU will close the regular season against Boise State on the day after Thanksgiving.

SDSU punter/kicker Matt Araiza against UNLV. The junior from San Diego leads the nation in punting (52.25 yards) and is on pace to set an FBS record. Araiza has 34 punts that have traveled at least 50 yards, including a long of 86 yards. He has 29 punts downed inside the 20-yard line. Araiza also tied a career high with three field goals in a 23-21 win against Nevada, including his first career game-winner with 1:21 left, from 35 yards.

SDSU can win at least 10 games for the fifth time in seven seasons. ... This will be SDSU’s first visit to Allegiant Stadium, the home of the NFL’s Raiders. ... The Aztecs have matched their best 10-game start in the last 52 seasons. ... SDSU jumped three spots in the College Football Playoff rankings. ... The Aztecs will be the fourth ranked team to face UNLV this season, the most since it played since five in 2010. ... The Rebels are coming off their first victory at Allegiant Stadium, 27-13 over Hawaii. ... Three years ago, SDSU was on track to reach the MWC title game but was upset at home 27-24 by UNLV, which was a 23-point underdog.