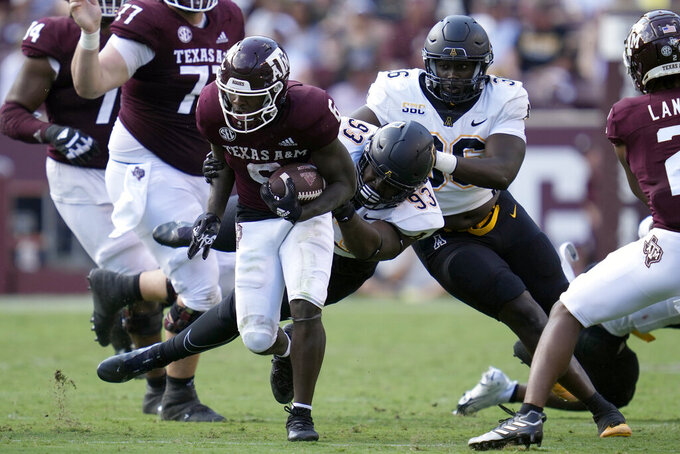 Line: Texas A&M by 6 1/2, according to FanDuel Sportsbook

The Hurricanes look to improve to 3-0 and continue their strong start in the first season under coach Mario Cristobal. Texas A&M will try to get back on track after scoring just seven points on offense in a 17-14 loss to Appalachian State at home.

RB Henry Parrish Jr. and Miami’s high-scoring offense vs. Texas A&M’s defense. Parrish has rushed for 217 yards and four touchdowns as the Hurricanes have piled up 100 points in two games. Texas A&M is looking to improve this week after allowing Appalachian State to run for 181 yards and hold the ball for more than 41 minutes.

Miami: K Andy Borregales has seen 15 of his 18 kickoffs become touchbacks, and he’s 16-for-16 on kicks — making all 13 extra point tries and all three of his field goal attempts.

Texas A&M: QB Haynes King’s job could be in jeopardy after he managed just 97 yards passing with no touchdowns last week as he failed to move the offense effectively. Coach Jimbo Fisher said he was evaluating the position and would consider a change right after the loss, but wouldn’t reveal this week if he would make a change Saturday.

This is the first meeting between these teams since 2008. ... Miami’s first two games, both at home, drew a total announced attendance of just over 103,000 — or roughly the total capacity of Kyle Field. ... This is the first road test for the Hurricanes, who will play away from home only twice in their first seven contests. They also go to Virginia Tech on Oct. 15; otherwise, they’re home. ... Hurricanes P Lou Hedley’s career average of 45.2 yards per kick ranks fourth-best among all active punters. ... This is the third straight home game to start the season for the Aggies. After Saturday’s game they’ll play four consecutive games away from Kyle Field, with a trip to face Arkansas in Arlington, Texas. ... Texas A&M RB Devon Achane scored both the team’s touchdowns last week after scoring on a 26-yard run and a 95-yard kickoff return. ... WR Ainias Smith has at least one catch in 25 straight games.