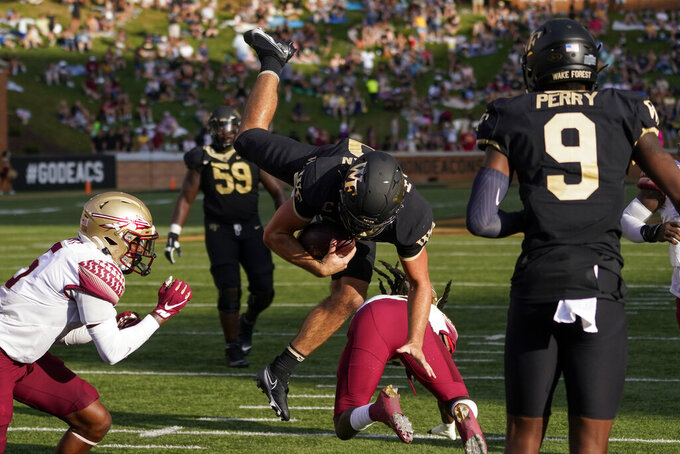 Wake Forest is again off to a fast start under coach Dave Clawson and has the best record in the Atlantic Coast Conference.

He wants the 24th-ranked Demon Deacons to keep building off of that, too, something Wake Forest has been unable to do in past years. The Demon Deacons enter Saturday's game against visiting Louisville as the league’s only team with multiple conference wins.

“We’ve been here before,” Clawson said. “We’ve been 4-0 four out of the last six years. How do you want to finish? I believe this team is capable of finishing stronger than the ’16, ’17 or ’19 team. But you have to prove it week to week on the field.”

The Demon Deacons (4-0, 2-0 ACC) have won every game by at least 20 points, including at home against winless Florida State and on the road against Virginia to start the league schedule. They’ve reached a point that has tripped them up in those past 4-0 starts under Clawson.

To his point, the 2016 and 2017 teams each lost their fifth game. The 2019 team pushed to 5-0 before losing 62-59 to the Cardinals, who led 28-7 by early in the second quarter on Wake Forest’s home field. And none of those three finished with more than eight wins.

The Cardinals (3-1, 1-0) haven’t lost since falling to Misssissippi in the season opener. They rolled to a 31-7 first-half lead against Florida State before holding on to win, getting a late turnover to seal it for the second straight game.

Coach Scott Satterfield noted that they’ll have to come up even bigger at Wake Forest. The Demon Deacons’ offense is clicking, and he doesn’t want a repeat of the 2019 shootout.

“You have to be fundamentally sound,” he said, “you have to have an understanding what they’re trying to do offensively because they do a lot of different things with the gaps game, zone read or they’ll run (Sam) Hartman a little bit.

“Then all of a sudden he’ll pull the ball, he’ll throw the ball on all these routes and they’ve got some excellent receivers.”

Some other things to know about Saturday’s Louisville-Wake Forest matchup:

Louisville has won five of seven since joining the ACC for the 2014 season, scoring 107 points in the past two wins. Last year’s meeting came in December as the Demon Deacons returned from a nearly monthlong pause due to COVID-19 concerns.

The Demon Deacons spent five weeks in the Top 25 during the 2019 season, cracking the poll for the only other time during Clawson’s eight-year tenure before jumping in Sunday.

“That wasn’t our goal to get ranked,” offensive lineman Michael Jurgens said. “We’ve got bigger goals than that.”

Scott Satterfield announced this week that wide receiver/kick returner Braden Smith sustained a season-ending knee injury in the Florida State victory, leaving the Cardinals without one of quarterback Malik Cunningham’s regular options. The sophomore had caught 11 passes for 68 yards and a touchdown and threw a 45-yard TD against UCF.

Smith’s injury followed last week’s pregame announcement that starting linebacker Monty Montgomery would miss the rest of the season after injuring his knee against UCF.

Ford leads the Cardinals with 19 receptions for 208 yards and a TD. The 6-foot-2, 240-pound sophomore is among six receivers with at least one score and leads four with at least 10 catches.

Perry has blossomed this year with team highs of 17 catches for 292 yards and three touchdowns, including 155 yards in the FSU win.

The Cardinals recorded a season-high six sacks at FSU, more than the previous three games combined and their highest total since posting seven against Wake Forest in 2016. Their 11 sacks are tied for 41st in FBS, significant for a squad that totaled just 21 last season.

“Ole Miss was like a life lesson because we played a high-tempo team,” said linebacker Yasir Abdullah, who had two sacks against FSU and four this season. “We have to just do our job and be disciplined.”