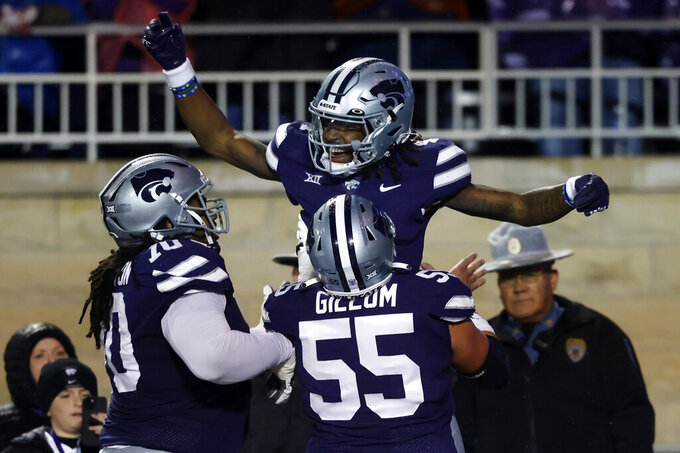 TCU has already made a strong case to be in the four-team College Football Playoff, but would leave no doubt with another win over Kansas State. The Horned Frogs won 38-28 in the previous meeting Oct. 22, after K-State led 28-10 midway through the second quarter in Fort Worth. The Wildcats can reach 10 wins for the first time since 2012, when there was no Big 12 championship game and they shared the regular-season title with Oklahoma. Kansas State's last Big 12 title game was in 2003, a 35-7 win over then-undefeated and No. 1 Oklahoma at Arrowhead Stadium.

Max Duggan vs. Will Howard. The QBs who weren't even starting at the beginning of this season won't go directly against each other, but the Big 12 title could be decided by which one plays better. Duggan took over in the season opener and is the Big 12 leader with 3,070 yards and 29 TDs passing, and only three interceptions. Howard, who started 10 games the previous two seasons, didn't take a snap until Adrian Martinez got hurt. Howard has 13 TD passes in his five games.

Kansas State: While Howard runs the show and RB Deuce Vaughn is among the nation's best players, WR Malik Knowles has become indispensable for the Wildcats. Knowles has caught 46 passes for 679 yards and two touchdowns, and run five times for 114 yards and three more scores. He averages 26 yards on kickoff returns with three TDs in his career.

TCU: The defensive backs. CB Tre'Vius Hodges-Tomlinson has four takeaways the past six games, while Josh Newton and Millard Bradford returned interceptions for scores last week — TCU's first defensive TDs this season. Mark Perry, like Newton a fourth-year player who just transferred into the program, has 66 tackles with five tackles for losses. Bud Clark has a team-high four interceptions, all in the past seven games.

TCU’s only other Big 12 title game appearance was in 2017, a loss to Oklahoma when the game was resumed after a six-year hiatus. K-State's fourth title game is its first since its only win in 2003. ... TCU RB Kendre Miller has 1,260 yards and a rushing TD in 13 consecutive games, the nation’s longest active streak and two shy of matching LaDainian Tomlinson’s school record set in 2000. ... All three of Kansas State’s losses have come against ranked teams, including two playing for conference titles in the Horned Frogs and No. 18 Tulane (American). … TCU is the first team since 1975 to win seven consecutive games by 10 points or less. ... Vaughn has 1,295 yards rushing, becoming the third player in K-State player in school history with multiple 1,000-yard seasons. … The Frogs have five wins over ranked opponents. No. 1 Georgia and No. 2 Michigan, the only other undefeated teams, have combined for four. ... Kansas State is allowing a Big 12-best 19.4 points per game this season, and has allowed only 15 points total in the second half of the last five games.