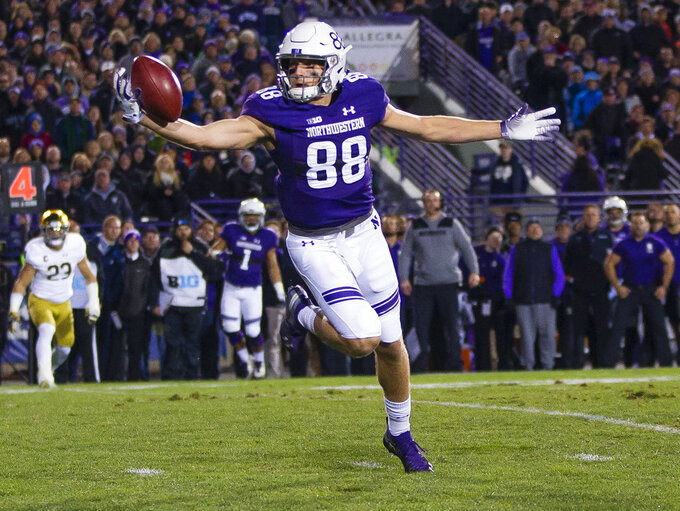 IOWA CITY, Iowa (AP) — Despite a 5-4 record, Northwestern holds all the cards in the Big Ten West title chase.

The underdog Wildcats will look to solidify their division position at Iowa, a team looking to rebound from back-to-back road losses and finish 2018 on a high note.

Northwestern (5-4, 5-1 Big Ten) has been surprisingly dominant in conference play, holding a one-game lead and tiebreakers over Wisconsin and Purdue. If the Wildcats go 2-1 over their final three games — a stretch that includes Minnesota and Illinois — they will clinch their first West title. Northwestern hung tough against No. 3 Notre Dame last week before falling 31-21.

"I liked how we came back and kept fighting and kept going. We know we're going to get a good one next week in Iowa," coach Pat Fitzgerald said.

Northwestern has been known to ruin an Iowa season more than once — most notably in 2009, when the Wildcats knocked out quarterback Ricky Stanzi and then knocked the 9-0 Hawkeyes from the ranks of the unbeaten.

The Hawkeyes, 10-point favorites for Saturday's game, might be the most talented team in the division. But they'll need to win out and get a ton of help to leap from fourth to first in the division.

"It really gets down to your ability to focus on what's important. It's like playing a game; when it's game time, the only thing that counts is that game," Iowa coach Kirk Ferentz said. "Right now I think the teams that can focus on their preparation and keep their eyes there and then go out and compete on Saturday are the ones that give themselves a chance."

Iowa's losses, to Wisconsin, Penn State and Purdue, were all potential wins until late in the fourth quarter. While the Hawkeyes might not be clutch, they have at times been dominant. Their point differential of 11.8 is currently better than the Iowa team that went 12-2 in 2015 and the one that went 11-2 and won the Orange Bowl nine years ago. Five of Iowa's wins have been by at least 17 points.

"They've been right there. One play in both of those games," Fitzgerald said of Iowa's back-to-back losses to the Nittany Lions and Boilermakers.

Northwestern, behind quarterback Clayton Thorson, is third in the Big Ten with 264.7 yards passing per game. But the Wildcats are by far the worst rushing team in the league, with an astonishingly-low 2.6 yards per carry. Northwestern is allowing 24.4 points per game, good for 49th in the country. But perhaps the most surprising stat about the Wildcats is that they've won nine straight against West teams and six in a row on the road in the Big Ten.

"When you look at them on tape, I think one thing is very apparent. They've got an identity, a clear identity," Ferentz said. "I think that's got to do with the longevity of coach Fitzgerald there and their staff. They're very well-coached. They know who they are."

"Our goal is just to move the ball and try to score points, and we'll do whatever we feel we have to do to be successful at that," Ferentz said.

Fitzgerald is 7-5 against Iowa. ... The Hawkeyes rank second nationally in kickoff return average at 27.6 yards, while Northwestern's 26 penalties are the fewest in the country. ... Iowa is allowing just 18.6 points a game, second only to Michigan in the Big Ten. ... Thorson's 48 career starts ranks second behind Washington's Jake Browning among active quarterbacks.

"The offensive line, like I've always said, it's like watching a concert pianist. It's really physical (and) well-coordinated." — Fitzgerald on Iowa.